Purana Qila Witnesses Demand for Renewing Commitment for the MDGs 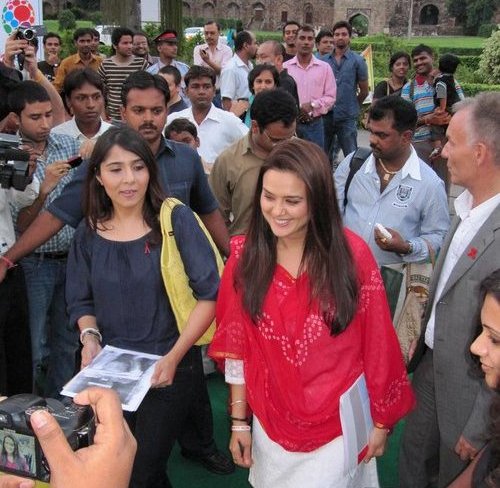 The pretty Preity (Zinta), standing tall at the ‘Make Noise for the MDGs’ campaign at Purana Qila in New Delhi

Purana Qila came alive with music, whistling, shouting and all forms of noise last Saturday with the ‘Make Noise for the MDGs’ campaign that was part of the ‘Stand up, Take action’ global call for ending poverty by 2015. A large crowd gathered at the venue and reminded the nations of the world about the United Nations Millennium Declaration that was signed by them on this very day in September 2000. Music performances from across India lighted up the gathering while the star (of the) attraction remained the Goodwill Ambassador for UNAIDS and for peace, Preity Zinta. She also read aloud the End Poverty pledge while interrupted it in between to become the pretty ‘whistle blower’!

The indigenous musicians who gathered from all over India to perform at this event created symphony of sounds demanding actions on the Millennium Development Goals. Violinist Sharat Chandra Srivastava  from Delhi, Manipuri folk musician Mayanglambam Mangangsana from Imphal and Mrindangam artist Shri Ganesh fromTamil Nadu were the other key stars at the event who used various kinds of drums and created a fusion of folk and classical music with a motto to make ‘noise’. Still other star musicians who had come together from all parts of the country also made magnificent attempts at this. A total of close to 100 musicians and well over half that number of instruments were used during the campaign.

The music delighted and charged up the audience all of whom joined in and stood up in support of the campaign. A photo exhibition entitled “We Can End Poverty…Working Together to Achieve the MDGs” along side all the ‘noise’ highlighted the efforts made by various agencies to eradicate poverty, illiteracy and hunger across India towards fulfilling the MDGs in the country. This made the entire experience enchanting for all those who attended while also made them think about the MDGs, the need for such goals and the urgency to meet them well within the set target year of 2015. The noise must surely have reached the political galleries of power and one can only hope would have helped create a political will for actions on the MDGs.

Image source. With inputs from Karan Rajpal and Aastish Kapoor

Views: 6,732
Share this ArticleLike this article? Email it to a friend!
Email sent!