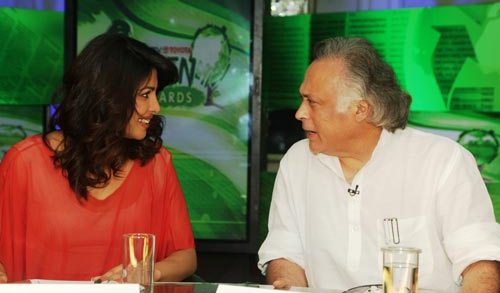 Delhi Greens Blog teams up with Sierra Club, the world’s oldest and largest grassroots environmental organisation to share with you what Sierra Club Chairman Carl Pope has to say about our Environment Minister, on climate negotiations and beyond. From Bt Brinjal, to Vedanta, to the second airport in Mumbai or be it holding other Ministries responsible for environmental mishandling, Jairam Ramesh has perhaps set the standard on being a good Environment Minister. And the world is talking!

New Delhi, India — Jairam Ramesh is India’s Minister of the Environment. He spoke to the joint U.S.-India Track 2 Climate Negotiations session today (October 1, 2010), where a group of business and environmental leaders from both countries are meeting to forge common ground on how the two countries can move forward on global climate diplomacy.

Ramesh has helped put environmental issues back on the political front burner for the Indian government, in a way that we are told hadn’t happened (since) Indira Gandhi was prime minister. On climate issues, with the support of Prime Minister Manmohan Singh, he brought India, which historically has been skeptical of robust engagement with the UN process,  right into the center ring in Copenhagen. He’s supported the evolution of the UN process from its sole dependence on the Kyoto accord to a more complex, multi-forum process.

But domestically his impact seems likely to be historic. He’s reframing environmental issues — his opening comment was, “Many of my colleagues and most of the media like to frame environmental issues as a clash between environment and development. They’re not. It’s about the following the law. The distinction is between guys who follow the law, apply for their permits, meet the standards, and guys who don’t.” He pointed out that India has very strong environmental laws — but has historically had very weak environmental enforcement. And he’s on the verge of changing that.

He has started by setting the example. A whole series of high-profile development projects — most prominently a bauxite-mining concession in the eastern state of Orissa  — have been halted on the grounds that they lack the proper permits.  A number of major and well-connected companies have seen significant hits to their stock prices as investors began to realize that they had been counting on their connections — not their compliance — to satisfy environmental standards.

Now Ramesh is moving to institutionalize his tough, law-and-order stand so that environmental compliance by even the well-connected will become India’s new norm. Ramesh is far too thoughtful to use the language of revolution — but my guess is that he has studied enough history to know that dramatic environmental change invariably follows three preliminary steps:

He’s moving on all three. By 2015 he’s teed up India to release a “Green GDP” calculation that takes environmental costs into account alongside the conventional GDP numbers. Meanwhile, he has commissioned an Indian version of the new United Nations Development Programme analysis of the economic values of ecosystems services.

To create a publicly transparent set of rules for what goes and what doesn’t, he’s proposing that India establish its own umbrella regulatory version of the U.S. Environmental Protection Agency. And, perhaps most transformationally, India has become the third country to create a special network of environmental courts where citizens can bring complaints that environmental laws are not being enforced or observed by government agencies.

The first such court will meet on October 18, and a backlog of 5,600 environmental cases will be fed into this new system. This announcement came as an Indian court issued a ruling in a contentious battle over a holy site that has been in the Indian Courts for decades — so creating special courts that can deal with environmental complaints promptly is a fundamental game changer.

Ramesh believes that Indian culture is intrinsically more receptive to environmental values than most societies — and he’s betting that if Indian society is empowered then that receptivity will produce transformational change.

It’s a fascinating experiment, and its potential is in fact revolutionary.

About Sierra Club: Named “the most influential environmental organization” by an Aspen Institute poll, the Sierra Club gives citizens the information and the means to make their voices heard. With 1.3 million members and supporters in 65 chapters and over 400 local groups across the United States, it has the resources to empower people and influence public policy through community activism, public education, lobbying, and litigation.

Views: 9,005
Share this ArticleLike this article? Email it to a friend!
Email sent!