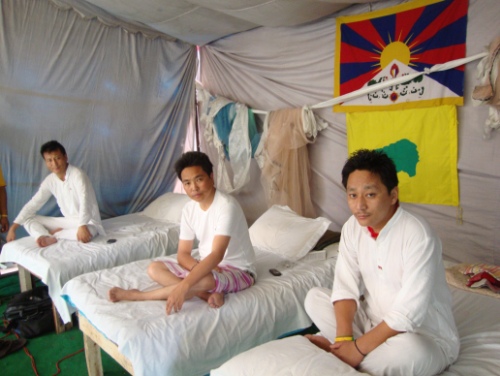 The struggle for a Free Tibet has been ongoing for the large number of Tibetan refugees living in India as well as in other parts of the world. Freedom, a word who’s meaning Indians well understand, is but the determination of each and every Tibetan living anywhere in the world. The Chinese Government has been oppressing the Tibetans in Tibet and recently targeted the Kirti Monastery in Ngaba (Chinese: Axa Xian) in Tibet. The Monastery is being destroyed by forced expulsion and arbitrary arrest that continue till the present day.

The Tibetan Youth Congress (TYC), a worldwide organisation of Tibetans united in common struggle for the restoration of complete independence of the whole of Tibet, decided 25 days ago to embark on an indefinite hunger strike aimed at highlighting the grave situation in Kirti monastery and the situation of the political prisoners in Tibet. Since the past 25 days, three office bearers of the TYC sat on a protest at Jantar Mantar, surviving on nothing but water and a spirit to free the Tibetans of the uncalled for atrocities on them in Ngaba.

The protesters had their demands clear: Immediate withdrawal of the “patriotic re-education” campaign and Chinese troops from Kirti Monastery and to unconditionally release all political prisoners including those arrested recently from Ngaba. Access for TYC delegation to assess the situation of political prisoners inside Tibet. And an appeal world governments and NGOs to recognize and support the historical status and struggle of Tibet as an independent nation. The protest has received overwhelming support and encouragement from Tibetans, friends of Tibet in India and supporters from all over the world particularly by various officials from Embassies and High Commission.

On the 25th day yesterday, the protesting members of TYC were visited by Ms. Anne Vaughier Chatterjee, Attache, European Union Delegation to India, officials from various Embassies and High Commission such as UK, Belgium, Norway, Sweden and Poland all of whom firmly requested that the hunger strike be called off due to the deteriorating health of the executive members. To urge the protesters to call off the hunger strike, a letter in support was also handed over which said, “We the members of the European Parliament are fully committed to defending human rights in the world and understand your demands and fully support your ongoing peaceful struggle against the oppression of the Chinese government…”

“…In the light of the above, we hereby reiterate our commitment to keep the issue of Tibet high on our agenda. We also believe that it would be of vital importance to send EU delegation as well as support independent journalists enter the region…”, the letter also stated. In view of staunch requests from the delegation of EU and their assurance for a continued support for Tibet in particular the issue at Ngaba Kirti Monastery coupled with pleas from Tibetans from inside Tibet, the TYC called off the strike on the 25th day, though the struggle to fulfill the demands continues. Delhi Greens stands in support of the Tibetan cause and wishes for a quicker resolution to the present crisis and an eventual and more peaceful Free Tibet.

Views: 9,412
Share this ArticleLike this article? Email it to a friend!
Email sent!