Green Walkathon and Stakeholder Gatherings: India Paved the Way for a Green Economy this WED 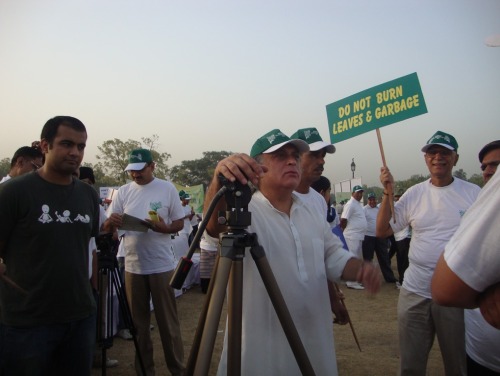 Hand..err..Heart and Mind at the Right Place: Environment Minister Jairam Ramesh at the Green Walkathon

India played the global host to the World Environment Day (WED) for the first time this year, an year for which the WED theme was chosen to be ‘Forests: Nature at your service”.  Shifting from the past practice of organizing WED at New Delhi only, the Ministry of Environment & Forests (MoEF), Government of India organized a series of activities, events and campaigns across the country during the first week of June 2011. Notable among these were events, activities and campaigns at Bhubneshawar, Uttarakhand, Himachal Pradesh, Sikkim, Arunachal Pradesh, Mumbai, Bengaluru and the Nilgiri Biosphre Reserve etc. The underlying objective of all such activities was to highlight the intrinsic link between quality of life, health of forests and forest ecosystems, and sustainable use of forests.

A “Green Haat” at Dilli Haat in New Delhi was organized by the MoEF which brought together over 52 partners from across India to showcase initiatives of forest dwellers, minor forest produce federations, women self help groups, NGO partners and highlight value added forest products. The Green Haat was organized from the 1st and 5th of June, 2011 and Environment Minister Jairam Ramesh declared that the organizing of the Green Haat will now be a regular event of his Ministry to mark the WED. Across the Himalayan region, in Uttarakhand, Himachal Pradesh, Sikkim and Arunachal Pradesh, awareness programmes and green marches involving school children were organized. The North East Museum Gallery at Regional Museum of Natural History, Bhubneshawar was inaugurated by Jairam Ramesh on 1st June, 2011.

A workshop on “Nature & Livelihood: Women’s Perspective” was also put together in New Delhi where women from various states shared their experience during an interactive sessions with panelists that included Sunita Narain, Chandi Prasad Bhatt, Radha Ben Bhatt, Devajitofa and Ms Jyotsana Sitling. The UNEP Executive Director, Mr. Achim Steiner and UN Resident Co-ordinator, Mr. Patrice Couer Bizot, also highlighted the environmental concerns in the global perspective and appreciated the initiatives of women leaders at grassroots in environmental awareness and forest conservation. A UNEP report on “Green Economy and the Forest” was also released during the workshop. On the occasion of WED 2011, the MoEF instituted a “Gaura Devi” Award to recognize the initiatives of “Gaura Devi” in forest conservation during the Chipko movement. The award will carry a citation and a cash prize of Rs. 2 lakhs.

A UNEP media workshop on Journalism and the Environment, an exhibition on Mumbai’s Environment highlighting environmental issues of metropolitan and coastal cities, tree plantation by the Forest Department of Government of Delhi at Juanapur & Mehrauli in Delhi, a dialogue with business community on Green Economy, biodiversity film festival for disadvantaged children – general public – prisoners and Air Force official in Delhi, a nature camp for children and an exhibition on Western Ghat diversity in Bengaluru, a workshop and marathon involving the IT sector at Bengaluru, painting competition at Delhi Zoo, a workshop on ‘Emerging issues in Wildlife Conservation’ at Dehradun were some notable events organized by the MoEF as part of the WED 2011 celebrations across India.

The week long activities planned for WED 2011 added momentum leading up to the “Green Walkathon”, a Rally for Environment organized by the MoEF and the Dept. of Environment, GNCT at India Gate. Over 1,000 participants from all sections of the society joined the rally in the early hours of 5th June which was flagged off by Environment Minister Jairam Ramesh. The Minister also administered a pledge for “Saving our Environment” during his speech before the Rally. Delhi Greens also participated in the rally and launched an year long Earth-O-Care campaign during the Green Walkathon. The objective of the campaign is to highlight the role of the two lifelines of Delhi: River Yamuna and Delhi Ridge and ensure their protection. Delhi Greens also facilitated the participation of the Environmental Desk of the Tibetan Women’s Association (TWA) in the Rally who were duly acknowledged by the Environment Minister.

Launch of the Earth-O-Care Campaign on World Environment Day 2011!

2 thoughts on “Green Walkathon and Stakeholder Gatherings: India Paved the Way for a Green Economy this WED”

Views: 11,672
Share this ArticleLike this article? Email it to a friend!
Email sent!