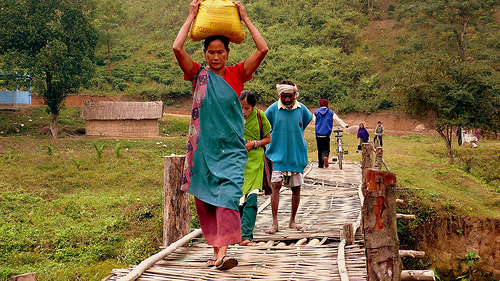 The North East of India is a link region between the Indo-Gangetic plains and the highlands of Myanmar and southwestern China. This is the meeting ground of three great civilisations and “where India begins to look less and less India and more and more like the highlands of southeast Asia”. For sixty years since decolonisation , the northeast has been a zone of endemic low intensity conflict since it is this region that post colonial India’s grandiose national building project was repeatedly challenged by battling ethnicities . The region has been increasingly militarised and continues to suffer from both a democracy and development deficit.

But if India learns to look at northeast’s demographic diversity and geo-strategic location as an asset and plays into the emerging geo-politics of Asia , the region will no longer be a liability but an asset to showcase India’s democracy amidst diversity and it will emerge as a growth zone feeding on enormous trade potential rather than being reduced to a basket case dependent on federal aid which is the case now. But this calls for radical new policy thinking that should start with changes in the Indian polity to accomodate autonomist aspirations of the battling ethnicities and resolve long festering conflicts that have militarised the region. The new policy framework would also have to address critical questions like illegal migration and settler-indigenous conflicts as well as those emerging from sharing of critical resources.

With this as the backdrop, the Nehru Memorial Museum & Library (NMML) invites all interested to a public lecture by Mr. Subir Bhaumik, Editor, Seven Sisters Post and Author, Guwahati on the topic, Flower Garden and Fluid Corridor: A New Look at India’s North East’.

Subir Bhaumik is a senior journalist and author specialising on North East India and its volatile but exciting neighbourhood. He has been BBC’s chief of eastern bureau for 17 years and was , until recently, the editor of the Guwahati based Seven Sisters Post. Bhaumik is author of two well acclaimed books “Insurgent Crossfire” and “Troubled Periphery” and has edited two books “Counter-Gaze: Media,Migrants, Minorities” and “Living on the Edge: Chittagong Hill Tracts” . He was a Queen Elizabeth Fellow at Oxford University (1989-90), a fellow at East-West Center , Washington and an Eurasian Fellow at Frankfurt University. He was recently awarded the Sivaprasad Barua Award for Excellence in Journalism in Guwahati.

One thought on “Public Lecture at NMML on ‘Flower Garden and Fluid Corridor: A New Look at India’s North East’”

Views: 13,450
Share this ArticleLike this article? Email it to a friend!
Email sent!