MGNREGA Extends Helping Hand in the Fight Against Climate Change 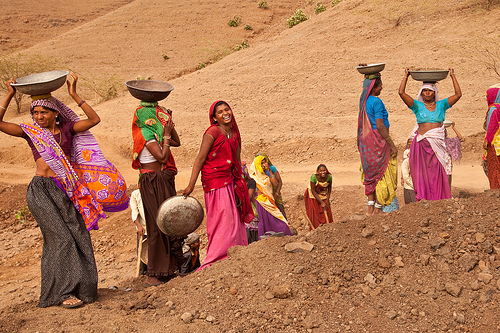 The fight against climate change just got a shot in the arm! A study carried out in 15 villages, involving more than 2,057 households who are direct beneficiary of the Mahatma Gandhi National Rural Employment Guarantee Scheme (MGNREGS) notes a reduction in the vulnerability of these households to climate risks. Increased area under plantations and orchards has been contributing to alternate incomes, increased employment generation and reduced migration in these people. Further, improved water availability and soil fertility is reported to be resulting in increased crop production with the consequence that the MGNREGS is leading to multiple environmental and socioeconomic benefits for the people at large.

The synthesis report which brought forward these findings has been prepared by the Indian Institute of Science (IISc, Bangalore) in collaboration with Ministry of Rural Development and German Development Cooperation and is based on survey across five states, viz. Andhra Pradesh, Karnataka, Madhya Pradesh, Rajasthan and Sikkim. This report, entitled “Environmental benefits and vulnerability reduction through Mahatma Gandhi NREGS” was recently launched by the Minister of Rural Development Shri Jairam Ramesh.

Overall the study concludes that MGNREGS works have contributed to improving Adaptive Capacity of the beneficiaries and Reducing their Vulnerability to Climate Risks. The major recommendations of the study include the following:

Building on recommendations of the study carried out in five states, it is now planned to focus on strengthening core processes of MGNREGA relevant for generating environmental benefits, including planning, technical implementation of MGNREGA works, monitoring and asset maintenance. The five intervention areas of the project are planned to be:

The best practices of the MGNREGA scheme are now being evolved to be show-cased and adopted by all other parts of the country. It should be noted here that a crucial aspect of MGNREGA is also to prevent rural migration into urban India, thus leading to several yet to be discovered socioeconomic and environmental benefits.

Image by UN Women Asia and the Pacific

Views: 7,677
Share this ArticleLike this article? Email it to a friend!
Email sent!