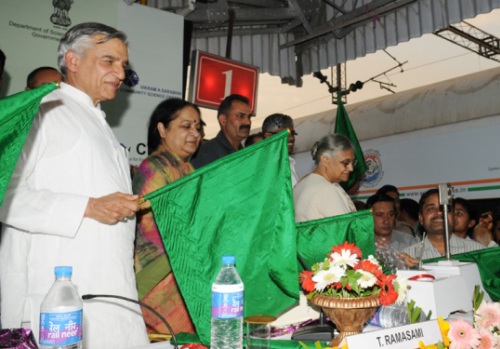 The second phase of the Science Express Biodiversity Special (SEBS), a mobile biodiversity exhibition train on a Mission to create massive awareness on India’s rich biodiversity, being flagged off. The train, which is now on its journey, was flagged off by Union Minister of Railways, Shri Pawan Kumar Bansal, Minister of Environment & Forests Smt. Jayanthi Natarajan and Smt. Sheila Dikshit, Chief Minister of Delhi from Delhi in the second week of April 2013. The first phase of the SEBS was flagged off in June, 2012.

Views: 35,424
Share this ArticleLike this article? Email it to a friend!
Email sent!