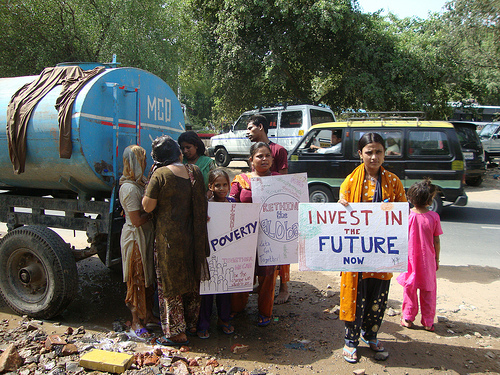 The World Day to Combat Desertification was recently observed on 17th June. The day is being celebrated every year since 1995 to promote public awareness relating to international cooperation to combat  desertification and the effects of drought. The present decade is also being marked as the UN Decade for Deserts and the fight against Desertification (UNDDD). However, since the day falls during the monsoon months in India, it therefore does not invite much attention. This year, as India reeled under the monsoon-flood crisis, drought is not the first or the second thing on anyone’s mind. However still, droughts are known to claim more lives than any other disaster. At the same time, it is predicted that in the near future, droughts are expected to be more severe, more frequent and more widespread due to climate change. This will impact water availability in many regions of the world.

Delhi’s ground water table is receding at a very high pace due to the increase in water withdrawal for various purposes and due to urbanization, resulting in reduced natural recharge to the aquifers. Delhi is a semi-arid region, i.e. the amount of precipitation is less than moderate and it mainly possesses dry climatic conditions. As a consequence of this, recharging of the ground water table takes a lot more time leading to problems of water shortage and ground water pollution. In 1983, the ground water level in Delhi was 33 feet and by 2011 this level has fallen below 132 feet. This implies that a sharp ground water table fall of 29 feet has taken place in the decade between 2001-2011. The worst-hit areas of ground water shortage are the South and South-west districts of Delhi. Data compiled by the Central Ground Water Board (CGWB) of the Ministry of Water Resources shows there is no immediate relief and the lowering of ground water table continues. Based on this, some agencies in Delhi have even predicted that Delhi could soon become a desert.

Addressing similar concerns on the global front, the UN Secretary General Ban Ki-Moon this year called for a “collective global response to drought and a shift from crisis management to drought preparedness and resilience.” He also called for implementation of last year’s agreement at the Rio+20 Conference on sustainable development to avoid and offset land degradation. This statement comes as an effect of the drought bite again. Wildfires raged in the United States last year as a result of the most extensive drought since 1950 . Whereas last month, Namibia declared National Drought Emergency as 14% of its population ailed from food insecurity. Luc Gnacadja, Executive Secretary of the United Nations Convention to Combat Desertification echoed Ban’s call. Gnacadja stressed that “Investing in our resilience today costs a fraction of the relief price we will pay tomorrow, and its benefits are worth far more. Becoming a drought-resilient global society is not only possible and affordable, it must be our first and only option.”

All is not gloomy. In the detailed statement released to mark the day, Luc Gnacadja also referred to the achievements of a village Batodi in Niger, where five million hectares of land were restored through agroforestry. As a result, the water table rose by 14 meters. “The most affected communities are not standing by but are leading the way to drought resilience and water security” Gnacadja said. Land for Life Award is a global initiative with a prize fund of US$ 100,000. It was established last year to recognize innovative and replicable community initiatives, which strengthen the resilience of vulnerable and affected populations. 3 winners for 2013 were announced as a part of global celebrations. Gnacadja said that winners need to be supported by policies to attract investment to scale them up and roll them out. He also announced that the Drylands Champions Initiative was set up under the Convention to rally support for individuals that are making a practical difference on the ground. Eritrea, Hungary, Kenya, Portugal and Thailand have announced that they will designate their first ever Drylands Champions as part of the Day’s celebrations. Let the World Day to Combat Desertification that has just gone by be a wake up call for reviving Delhi and protecting its natural water resources: River Yamuna, the wetlands and the ground water. I hereby request all of you to please save water. Don’t let our future dry up!

One thought on “United Nations Calls for Global Action on Drought”

Views: 9,544
Share this ArticleLike this article? Email it to a friend!
Email sent!