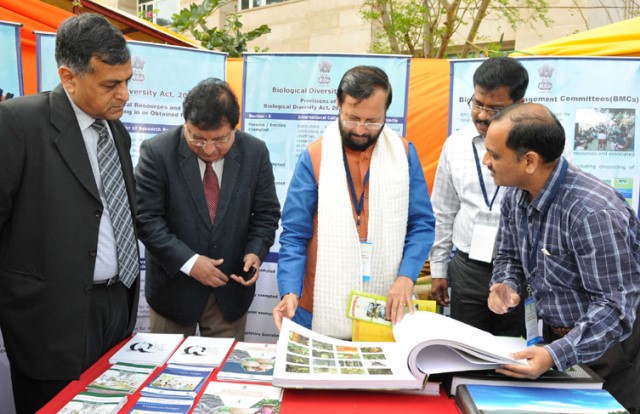 International Day for Biological Diversity is celebrated to recognize the pivotal role of biodiversity to life on earth and human well-being, as well as to increase awareness of the importance of biodiversity and the threats to it. It was on this day in 1992 that the text of the Convention of Biodiversity was adopted.

The International Day for Biological Diversity is being celebrated all over India today. The main event is being held in Srinagar, Jammu & Kashmir.

Following is the text of the message from the Minister of State (Independent Charge) of Environment, Forest and Climate Change, Shri Prakash Javadekar on this occasion.

The theme this year, ‘Biodiversity for Sustainable Development’ is very topical, as the international community accelerates its efforts to define the post-2015 agenda, including adopting a set of goals for sustainable development.

This year’s theme reflects the bigger and very crucial paradigm shift that the world has undergone from seeing ‘development’ and ‘environment’ as two ends of a spectrum, where one must be compromised in order to enhance the other, to having development while protecting environment.

Biodiversity, the variety of life on earth, is vital to social and economic development, and is indeed fundamental to our survival. Over the years, retrospective wisdom and the development experience have guided us in favour of the commonsensical understanding that protecting the variety of life forms and their infinitely complex interactions, form the very basis for long-lasting and inclusive development.

In other words, environment, or more specifically biodiversity and its invaluable and often irreplaceable ecosystem services, from the air we breathe to the water we drink, are the very foundation on which viable long-term development rests. Former themes for the International Day for Biological Diversity have captured this fact in snippets.

The challenge before India to imbibe and translate the theme of ‘Biodiversity for Sustainable Development’ is imperative in the light of our privileged status as a megabiodiverse country, past and projected demographic transitions and commitment to democracy as a political principle.

These three facets make it non-negotiable that we galvanise the political will, scientific and technological know-how and financial resources to contribute to the agenda set out in the outcome document from the Rio+20 Conference, ‘The future we want’.

Nature has generously endowed our country. With only 2.4% of the world’s land area, India has 7-8% of the recorded species of the world, with over 46,000 species of plants and 91,000 species of animals. India is also an acknowledged centre of crop diversity, and harbours many wild and domesticated animals, fish and millions of microbes and insects. The ecosystem diversity is also unparalleled.

These are the strengths to draw upon to meet the goals of ending poverty and hunger; achieving food security and improved nutrition and promoting sustainable agriculture; ensuring healthy lives and promoting well-being for all at all ages; ensuring availability and sustainable management of water and sanitation for all and in making cities and human settlements inclusive, safe, resilient and sustainable.

Promoting multiple varieties of staple foodgrains; switching to cropping patterns, wider seed and plant variety choices, water conservation and utilisation patterns, and farming practices that combine the best of traditional wisdom and science with a whole-system perspective; valuing the therapeutic properties and medicinal uses of various parts of plants and animals; all form key aspects of the way ahead.

Communities that are inclusive and resilient are also the only ones that will be safe in the long run. The income-poor in India and the world over face the negative fallouts of depleting and degraded natural resources in disproportionate measure to those who are responsible for such depletion and degradation. Sustainable development rests on a viable and sound natural resource base.

The future we want, thus depends heavily on the restorative and ameliorative action that we engage with, in relation to our wealth in biodiversity today. This challenge can only be met with broad stakeholder participation. From the right knowledge, to the right resources and the right spirit of working together for the common good, may the International Day for Biological Diversity 2015 help us draw on synergies and strengths across sectors to achieve the vision of Biodiversity for Sustainable Development.

The Day is being celebrated all over the country by different States and organisations. The main event is being held in Srinagar in the State of Jammu & Kashmir. In this event, the BIOFIN India project is being formally launched today with the release of a brochure. Another brochure on announcement of India Biodiversity Awards 2016, the third in the series is being released today, along with a release of a publication on good models of biodiversity governance emanating from India Biodiversity Awards 2014.

Also being released today is an India Business and Biodiversity Initiative publication on best practices on biodiversity management by some companies.

As we celebrate the 2015 International Day for Biological Diversity, let us work together for conserving biodiversity to ensure the future we want for us and our coming generations. For, we have borrowed this earth from our children, and not inherited it from our ancestors.”

Views: 2,599
Share this ArticleLike this article? Email it to a friend!
Email sent!