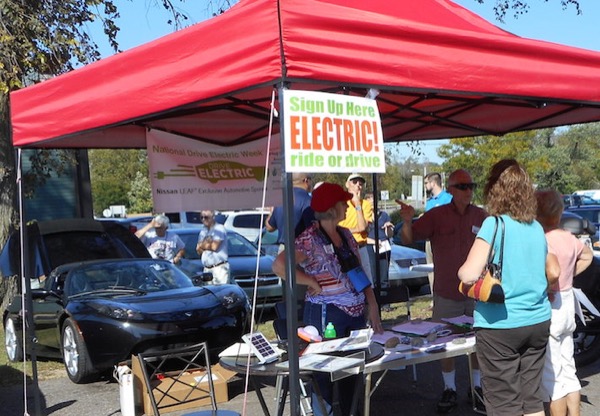 Plug In America, a San Francisco-based national nonprofit organization has been working to accelerate the shift to plug-in vehicles powered by clean, affordable, domestic electricity to reduce America’s dependence on petroleum and to improve the global environment. Plug In America has been successful in developing the world’s largest network of plug-in vehicle owners and drivers.

The organization conceived a National Drive Electric Week in 2011 and has advanced workplace charging by pioneering regular ride-and-drive events at such leading corporations such as Google, Mattel and Paramount Pictures. The National Drive Electric Week was celebrated between September 12-20, 2015 and was designed to showcase the fun, cost-savings and clean-air benefits of plug-in vehicles.

John Gallagher, a resident of Oklahoma, USA has become the first oil-field worker to organize the National Drive Electric Week event in his neighbourhood! Gallagher, who hauls oil in his 18-wheeler from a local well site to a major pipeline, staged his electric vehicle (EV) event at a local art colony near two of America’s leading oil production companies, Continental Resources and Devon Energy, among others.

Gallagher has never seen an EV in Western Oklahoma, “the heart of oil country,” as he calls it, and doesn’t own an EV. But everything changed when he saw “Revenge of the Electric Car” and he has become an outspoken advocate of these plug-in vehicles since then. In a video Gallagher recorded (click here to watch it on Youtube), he clarifies that,  “It is not about being anti-oil, it’s about, this is the future, this is just better.” He explained to Plug In America that better means better for the consumer who no longer has to hassle with oil changes and other maintenance or going to the gas station. They get to charge at home, instead.

The National Drive Electric Week is organiesd jointly by Plug In America, the Sierra Club, the Electric Auto Association along with local groups and organises events which typically feature all-electric and plug-in hybrid electric cars from every automaker on the market. Nissan and its all-electric LEAF has served as the event’s exclusive automotive sponsor since 2013. The National Drive Electric Week concluded on September 20, 2015 and details of every event organised in the USA can be found at this link.

Image by Bruce Brown via driveelectricweek.org

Views: 3,563
Share this ArticleLike this article? Email it to a friend!
Email sent!