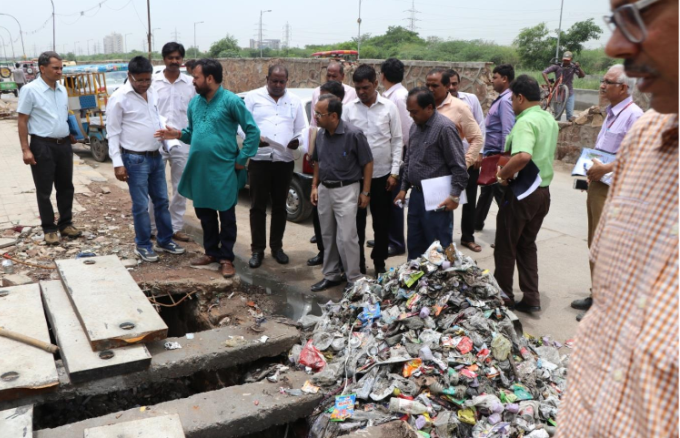 Neeraj Kumar, a resident of Pandav Nagar (Delhi) had submitted a Petition on 29 May 2017, alleging failure on part of Public Works Department (PWD), Government of NCT of Delhi and the Municipal Corporations of Delhi in discharging their duties of de-silting the drains for preventing water-logging in Delhi.

The Petition, countersigned by Sanjeev Jha (MLA), was directed to the Delhi Assembly Petitions Committee for further probe into the matter. The Committee recently came out with its Report on this matter and tabled it in the Legislative Assembly of Delhi 0n 30 June, 2017.

The Report is a MUST READ for every citizen of Delhi who wants to understand why water-logging takes place in Delhi year after year despite promises and tall claims.

Every year, monsoon showers and non-seasonal rains bring more reasons to stress over than rejoice for Delhiites. The water-logged streets followed by hours of traffic jam bring the city to a standstill. The highly-ambitious claims of civic bodies seem good on paper, but next-to-nothing on ground. Crores of money invested in de-silting of drains and nallahs appear to be a wastage of taxpayers’ money.

Earlier this year, the pathetic condition of the city led to the formation of a Coordination Committee based on a suggestion by the Hon’ble High Court of Delhi. The Committee, which was meant to ensure proper cleaning of public roads and drains, failed to deliver.

Findings of the Petition Committee

During its proceedings, the Committee inquired about the status of implementation of directions issued by the Chief Minister of Delhi. It also made a few surprise field-visits to various areas of Delhi along with the PWD officials. It was found out that contrary to the PWD’s claims, Delhi was not at all prepared for the monsoons.

Drains, which were claimed to have been de-silted, were found overflowing with silt and garbage. The Principal Secretary of the Public Works Department presented a fabricated report to the Committee, as per this Report. Moreover, report of the Municipal Corporations also turned out to be manipulated a one full of false claims and lies.

The Committee has made several recommendations to improve the current situation, including conducting of an inquiry by the Chief Secretary of Delhi, to fix responsibility. It has further suggested that a modern and dynamic system should replace the old, inefficient mechanism of cleaning and de-silting. The Chief Secretary was directed to submit an Action Taken Report to the House, based on the findings of this Petition Committee Report.

Top image has been taken from the said Report

Views: 2,879
Share this ArticleLike this article? Email it to a friend!
Email sent!