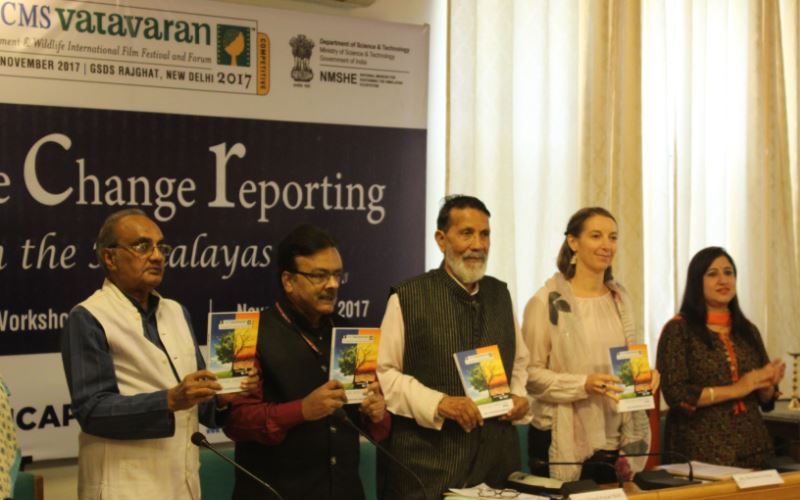 The CMS Vatavaran is India’s only International Environment and Wildlife Film Festival and Forum that has been using film as a medium for raising environmental awareness since over a decade. This year, the theme of the 9th CMS Vatavaran Festival, held between 2 to 6 November at Gandhi Smriti and Darshan Samiti, Rajghat) was Conservation for Water. Delhi Greens was happy to partner with the 9th CMS Vatavaran and encouraged all our members to participate in this meaningful Film Festival in the best interest of Delhi and the global environment.

The Five Day Long 9th CMS Vatavaran Film Festival included not just Film Screenings from across the Indian sub-continent and the world, but also Seminar, Workshops, Exhibitions of Green & Eco-friendly products, in addition to award distribution to those who are contributing their part towards the protection and conservation of our common environment.

The Film Festival was therefore a five-day long conglomeration of individuals either working to- or interested in protecting Planet Earth from the ongoing threats due to climate change, water security challenges, man-made disasters and unplanned developmental activities. A total of 113 Environmental Films were screened during the 9th CMS Vatavaran Film Festival. The most interesting aspect of the Film Festival was the large participation from the youth, who are also the future leaders and who need to work to secure and protect their future. More than 2,000 school and college students and citizens from all walks of life participate in this five day long Film Festival.

The Delhi Greens Blog will continue to share from the 9th CMS Vatavaran Film Festival, and highlight some of the films that were screened that must be watched by every citizen of India and the world, to ensure environmental protection and our survival on this Planet amidst the ongoing environmental crisis.

Views: 3,781
Share this ArticleLike this article? Email it to a friend!
Email sent!