Urban Affairs Ministry Accepts That It Is Cutting 14,031 Trees in Delhi 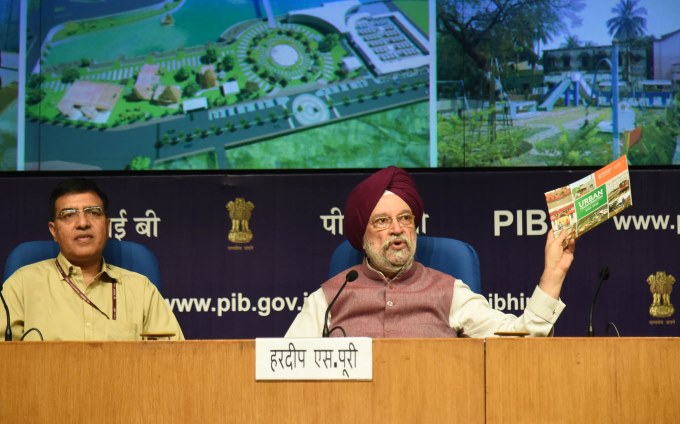 File photo of Minister of State for Housing and Urban Affairs (I/C) Shri Hardeep Singh Puri, addressing a press conference on the initiatives & achievements of the Ministry during the last four years in New Delhi.

In a bizarre press release, the Ministry of Housing & Urban Affairs of the Government of India has agreed that it will be cutting 14,031 trees in and around Sarojini Nagar in South Delhi (technically in South-west district of Delhi). “All the trees are not being cut,” the statement begins with some relief. However it then clarifies, “Only 14,031 nos. trees are to be cut out of the existing trees of 21,040 nos.”

The press release further goes on to say that, “against the 21,040 nos. of existing trees; 23,475 nos. of trees shall be available in these colonies during/after the Re-development (saving of 6,834 nos., transplantation of 1,213 nos. and new plantation of 15,428 nos.). What it doesn’t say is (1) have these new plantations already taken place 10 years back…so the now grown up trees can replace the trees being cut and (2) where will the Ministry find the land to plant 15,428 trees in and around Sarojini Nagar?

And to add further to these two points, does the Ministry think that newly planted saplings will become a fully grown tree overnight? And most importantly, if the Ministry has land available to plant 15,428 trees in South Delhi then why has the Ministry not already planted these trees to bring down the alarmingly hazardous air pollution being faced by the citizens and children of Delhi city?

The Ministry again gets it wrong when it says, “The redevelopment of the seven colonies viz. Nauroji Nagar, Netaji Nagar, Sarojini Nagar, Mohammadpur, Sriniwaspuri, Kasturba Nagar and Thyagaraj Nagar will lead to an increase (in) the green area coverage by about 3 times from the existing green space area and the compensatory plantation of trees will be done in the ratio of 1:10 thereby resulting in enhanced tree coverage area.

The compensatory plantation is always done in the ratio of 1:10 since the Survival of the Fittest theory suggests that only about 1 sapling will survive and grow up to become a tree from every 10 saplings planted. So planting 10 saplings for every 1 tree cut will not enhance the tree coverage area. It will, at best, replace the existing fully grown trees after 10 or so years of sapling plantation.

In another part of the press release, the Ministry says, “With the design of multi-storied residential/commercial blocks, the effective ground coverage has drastically reduced; enabling more space for the green area.” While this makes logical sense at first, but has the Ministry forgotten that while the buildings may be less, there will be many many more residents living in these multi-storied high rises. There would therefore be many more cars to park, and much more area required for managing solid waste and other facilities. The water demand itself will drastically increase which is concerning since this part of Delhi is already suffering from alarmingly declining ground water table.

The Ministry then goes on to say in its release that, “the upcoming complexes are being developed according to “Green Building Concepts”, zerowaste discharge and environmental sustainability” and lists some of the measures. The most interesting to read is, “Solid waste/Waste water will be collected, segregated and treated in-house and reused for horticulture purposes and flushing.” Can the Ministry point out any residential project anywhere in Delhi where this has been successfully implemented. Because the waste from these high rises is otherwise going to be a major challenge for both the killer Ghazipur landfill and the Okhla landfill in the near future.

Cutting trees in the highly polluted Delhi city is thus an unthinkable and unpardonable act that must be stopped with immediate effect. The environmentalists and concerned citizens of Delhi stand with the Government in its every efforts for sustainable urban development of Delhi, despite any kind of name calling. However, we equally expect the Government to not ruin and make secondary the health and environment of the people of Delhi.

“Sustainable, Balanced and Integrated Development of Urban Areas is a Key Priority of the Government and a Central Theme in Our Urban Growth Paradigm,” we hope the Urban Affairs Minister Shri H.S. Puri will standby with this statement that he made on World Environment Day recently.

2 thoughts on “Urban Affairs Ministry Accepts That It Is Cutting 14,031 Trees in Delhi”

Views: 5,085
Share this ArticleLike this article? Email it to a friend!
Email sent!