Delhi’s Winter Woes Should Be Declared A National Emergency 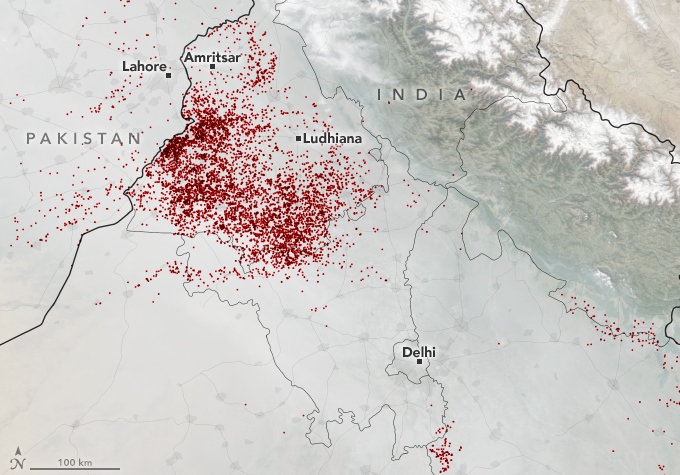 Stubble burning around Delhi during October 2018.

Winter is peaking in Delhi these days and the air pollution this year has been more engulfing than ever. As Delhi headed into the winter months, citizens did brace for the city’s notoriously poor air quality to get even worse. The overall Air Quality Index (AQI) of Delhi was recorded close to 250 at the end of October. Things got much out of hand though and according to available figures, AQI has peaked at 999 on more than one days at several places in Delhi since then.

With the approach of winter, airborne particles and toxic chemicals that make up the smog prove to be a major hindrance to daily life in Delhi every year. This also proves to be a major public health hazard. The Lancet Commission on Pollution and Health has reported that 9 million premature deaths took place due to air pollution in 2015. More than 2.5 million of these deaths were in India, the most in any single country.

The situation hasn’t improved in the last few years, and people continue to struggle to breathe in the national capital. Even as other parts of the country also gasp for breath, the NCR region in the country stands out for air that is consistently terrible. The Courts in the country have already asked for and have gotten implemented a Graded Response System to the pollution crisis in Delhi.

The Government of Delhi has stepped in saying that odd-even can be implemented any time and that the use of private vehicles will be banned if air pollution worsens. The Centre has also said that the Supreme Court’s order on firecrackers will be followed strictly in Delhi and NCR region and only the sale of eco-friendly fireworks is to be permitted. The implementation of these tall claims and adequate oversight of public compliance however, has so far not made much difference.

What’s unique about Delhi’s winter woes is the mix of rural and urban pollution. Much of it comes from farms in nearby states of Punjab, Haryana, and Western Uttar Pradesh. With one set of harvest over, farmers start burning the crop stubble to prepare the fields to plant the next crop. Time is of the essence and in the absence of readily available labour during this time of the year, farmers prefer to burn the stubble than to have it removed.

The smoke from the resulting burning of stubble outside the city at the onset of the winter mixed with pollution inside the city, coming from construction, vehicles and industrial emissions. Consequently, Delhi is engulfed in a layer of smog that continues to remain hanging in the lower atmosphere almost throughout the winter months due to temperature inversion phenomenon. Crop burning also results in the emission of large amount of the carbon dioxide gas. The latter is a greenhouse gas (GHG) and contributes directly to global warming and climate change.

Despite such an alarming scenario, little is being done on-the-ground in this aspect. Looking into alternative strategies should be top priority, and Delhi should lead such a paradigm shift in stubble waste management. The stubble and straw can be tilled into the ground using machines, or could be transported to power plants, where using biomass electricity is generated. Traditionally too, crop residues had many uses, right from thatching to making bed for livestock.

To make the stubble waste economically viable, we need an innovative approach and a determined body to look at these affairs. In 1999, the Association of Southeast Asian Nations started a Zero burning initiative, but no country was enthusiastic to roll out the plan. Among the developed countries, the United Kingdom enacted the Crop Residues (Burning) Regulations Act in 1993 that prohibits people from burning residue, except for purpose of education or research or to eliminate pests.

China, however, devised an interesting way to deal with the problem. It banned stubble burning in 1999 and penalized officials under whose jurisdictional area the burning is detected. The fines go up to $80,000. In 2015, in Henan County, the Chinese Government collected $37 million in such penalties.

On the other hand, politicians at home think of air pollution as a minor, temporary inconvenience rather than a larger problem. The Union Minister of Environment, Forest and Climate Change, Dr. Harsh Vardhan, made a comment not long ago, telling CNN-News 18, that while high levels of particulates could be harmful, “no death certificate has the cause of death as pollution.” A similar observation was made by the Secretary of the Union Environment Ministry at the beginning of this week. All this despite the fact that studies are now showing how lakhs of people are dying due to air pollution.

Pollution is a large-scale problem and its solutions are complicated and multi-fold, but efforts need to be made if we are to improve the pathetic condition we currently accept as the norm. The #RightToBreathe campaign has gained momentum previously, and is sure to emerge stronger in the coming months. What policy makers need to realize is that this inaction on their part is nothing short of a criminal offense, especially in the context of the extravagance that the State is partaking in by spending crores on statues when the funds can and should be directed towards fervent efforts in what is nothing short of a national emergency.

Views: 2,477
Share this ArticleLike this article? Email it to a friend!
Email sent!