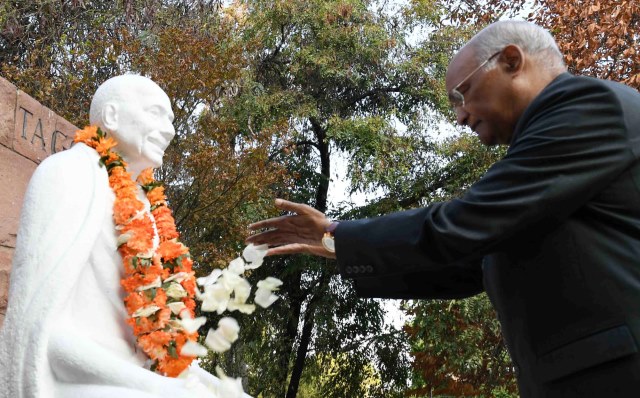 The Hon’ble President of India welcomed and addressed the 17th Lok Sabha in the Parliament of India on 20 June 2019.

Following are excerpts from his speech which talk about environmental protection and biodiversity conservation.

19. One of the biggest challenges of the 21st century is – the growing water crisis. Over time, the traditional and effective practices of water conservation in our country are disappearing. Houses have come up over ponds and lakes, and the vanishing water sources have accentuated the water crisis for the poor. In view of the growing impact of Climate Change and Global Warming, water crisis is likely to aggravate further. Today, the need of the hour is that the way the country has shown seriousness about ‘Swachh Bharat Abhiyaan’, the same seriousness be shown in ‘Water Conservation and Management’.

20. We must conserve water for our children and future generations. The creation of the new ‘Ministry of Jalshakti’ is a decisive step in this direction, which will have far-reaching benefits. Through this new Ministry, the systems related to water conservation and management will be made more effective.

21. My Government is fully conscious of the crisis in the drought-hit areas and stands by every affected citizen. With the support of State Governments and Sarpanches at the village level, it is being ensured that farmers are assisted and the scarcity of drinking water is tackled.

35. Our countrymen can learn a lot from tribal communities. Our tribal brothers and sisters live in harmony with the environment and nature and maintain a beautiful balance between development and tradition. In New India, every effort will be made to create an inclusive and sensitive system in the interest of tribal communities. Many schemes have been implemented for all-round development of tribal areas. Work is in progress to provide ‘Learning to Earning’ facilities to the youth residing in the forest areas. In tribal dominated areas, ‘Eklavya Model Residential Schools’ are being set up for children. The thrust is on value addition and marketing of forest produce through Van Dhan Kendras.

66. Infrastructure will play an important role in ushering in a prosperous India. My Government’s continuous endeavour has been to build infrastructure in an eco-friendly manner. Along with concrete, greenery has been made an integral part of the highway and expressway projects. For supply of electricity, optimal utilisation of solar energy is being stressed. Household and industrial wastes are also being used in road construction.

72. My Government is fully devoted to make the flow of Ganga uninterrupted and pollution free. Recently, encouraging evidence of revival of aquatic life at several locations along Ganga have been reported. This year, during the Ardhakumbh in Prayagraj, the cleanliness of Ganga and amenities provided to the devotees have made news throughout the world. My Government has enhanced the dignity and self-esteem of every person who contributed towards the successful organization of Ardhakumbh by honouring them.

73. Under the ‘Namami Gange’ scheme, my Government will further accelerate the campaign for closure of drains releasing effluents in the river Ganga. On the lines of river Ganga, the Government will also endeavour to clean up other rivers such as Kaveri, Periyar, Narmada, Yamuna, Mahanadi and Godavari.

74. My Government is making earnest efforts for conservation of forests, wildlife and the environment. In recent years, forest and tree cover has increased by more than 1 per cent. During the last five years, protected areas in the country have also increased. In 2014, the number of protected areas in the country was 692, which has now gone up to 868. To address the challenges posed by air pollution, ‘National Clean Air Programme’ has been started in 102 cities.

75. Solar energy plays an important role in reducing the adverse effects of Climate Change and Global Warming. Proactive efforts of India have resulted in the formation of the International Solar Alliance. Through this organization, India is contributing significantly to the development of solar energy in the developing countries of the world.

Views: 2,892
Share this ArticleLike this article? Email it to a friend!
Email sent!