Beat the Heat with the Magic of Green 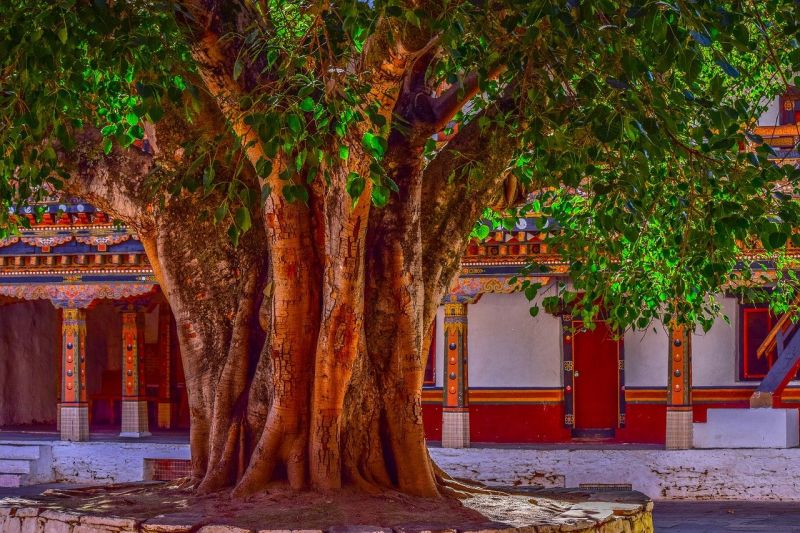 Soaring temperatures and scorching heat define the summer season of Delhi. Beginning in March, temperatures rise from about 200C to above 45oC in the months of May and June. This makes life for the people of this region very difficult. Heat, excessive perspiration and sweating, sun burn, constant thirst, fatigue and lethargy make any form of physical, social or economic activity extremely uncomfortable to undertake.

Traditionally, local residents have responded to these extreme climatic conditions by confining themselves to the relatively cooler confines of their homes. Outdoor activities are generally taken up in the mornings and late evenings. Technological advancements in the form electricity driven cooling systems – room coolers and air conditioners, air conditioned buses, automobiles and trains have made living and travelling under excessive heat a much more comfortable experience.

Urban Heat Islands make the urban areas of Delhi warmer than their surroundings, especially during the night and both people and infrastructure are find it difficult to cope. Many neighborhoods experience temperatures above the normal range, with many feeling warmer than usual. Morning walkers may feel the need to wake up just a little earlier to enjoy the pleasant morning breeze and beat the heat.

Air conditioners need frequent repairs as they are unable to provide the cooling wanted and the human body being ill equipped to adapt to the heat is unable to handle the sudden warming causing people to complain of heat stress. The reason for this recent change may be traced to the absence of vegetation and the color green in our lives. A good idea therefore is to grow and maintain house cooling plants around you. Scientifically, the phenomenon of the Heat Budget and the interaction (reflection and absorption) of incoming sun’s rays with natural and man-made features may be the key to this increased warming.

Vegetation and their green color have two distinct qualities – they use incoming energy during the process of photosynthesis for their own growth and development (similar to the consumption of food by humans) and give out moisture during the process of evapotranspiration. The more energy they use the less is available for other processes like warming the earth.

Concrete surfaces on the other hand are inanimate and do need energy to support any life processes. They absorb light and reflect it back as heat. With buildings becoming higher and closer due to principles of intensive land use being supported by planners and developers, there is ample heat being reflected back into the environment, thus altering normal heat budgets and warming surroundings.

Green is one of the seven colors of the rainbow and has historically been associated with wealth, fertility, life, health and hope. A color known to have a calming effect on the human mind, it brightens up an otherwise dull and dreary landscape and is the only color to play a significant role in the very sustenance of ecological systems. Oxygen produced by green vegetation is the only reason why the earth is inhabitable.

The wide availability of the green color in the form of vegetation and its very unique response to incoming sun’s rays makes it play an extremely important role in Heat Budgets of the Earth, local and global temperatures and as an adaptation measure to rising temperatures and Urban Heat Islands. However, this basic color is gradually losing its presence in our landscapes with increasingly large patches of vegetation being cleared to make way for concrete buildings, roads and industries.

Spaces too are diminishing as buildings get closer and higher to make place for the massive populations who wish to make the capital their home. According to the India State of Forest Report prepared by the Forest Survey of India, Ministry of Environment and Forests (GOI) in 2015, the total tree cover in the capital has been declining. From 120 sq kms in 2011 (8.09%) it has declined to 111 sq kms in (7.5%) in 2015.

In Central Delhi, New Delhi and South Delhi tree cover accounts for 20.56%, 49.29% and 32.86% respectively of the total geographical area. However, in revenue divisions under the North and West Forest Division tree cover varies between 3.87% and 11.54% of the geographical area.

Green spaces in urban areas were primarily used as recreational spaces for the young to play and the old to relax and unwind. However, there is a need to re-look at these spaces in terms of other benefits that they can provide, especially their role in supporting ecosystems in general and urban ecosystems in particular. There is a need to look at these spaces in terms of possible solutions to increasing problems facing the environment, especially excessive heat conditions.

The simple introduction of ample vegetation in parks in the form of local varieties of trees with their dense tree covers and wide spread branches can reverse this warming trend. It will absorb the sun’s rays, divert its use towards other earth processes, reduce the amount of energy available for heating the earth; and therefore contribute to cooler surroundings.

Native to the Indian sub continent, the Banyan tree is one of the largest trees in the world by canopy coverage. Its mature, thick, tall and sturdy trunk; green elliptical leaves, widely spread out branches and hanging roots gave the wanderer, the mystic and the village folk a place to calmly sit and relax amidst the harsh heat.

Now referred as the national tree of the Indian republic, historically, the Banyan tree inspired many rulers to incorporate the use of trees and other vegetation into their planning and design. Continuous rows of local varieties of trees were planted along roadsides; and gardens with abundant vegetation and tall trees providing the small habitations below with shade helped keep surroundings cool. It made the harsh heat of the city slightly bearable to live in.

The Banyan tree is thus symbolic of a way of life where humans found simpler solutions to the intolerable heat of Delhi. However, such trees are no longer a part of popular culture or human imagination. Its benefits are known little by a generation for whom trees are rarely seen as source of relief from the heat. This generation is driven and inspired by technological advancements and find very little recreation or leisure in open spaces and parks let alone under the shades of the old banyan tree.

As the city pools in its resources and finds innovative strategies to motivate people to plant trees, one is left with the hope that scientific logic and reasoning and a sense of awareness may move people’s hearts and minds to think green. May it serve as starting point for many to revive a lost culture where humans and nature could coexist, inspire them to convert thought into action and mobilize them to work towards greening their surroundings and popularizing a lost way of life.

Valerie holds a master’s degree in Geoinformatics from TERI University and her areas of interest include remote sensing and GIS, natural resource management and water security.

Views: 928
Share this ArticleLike this article? Email it to a friend!
Email sent!