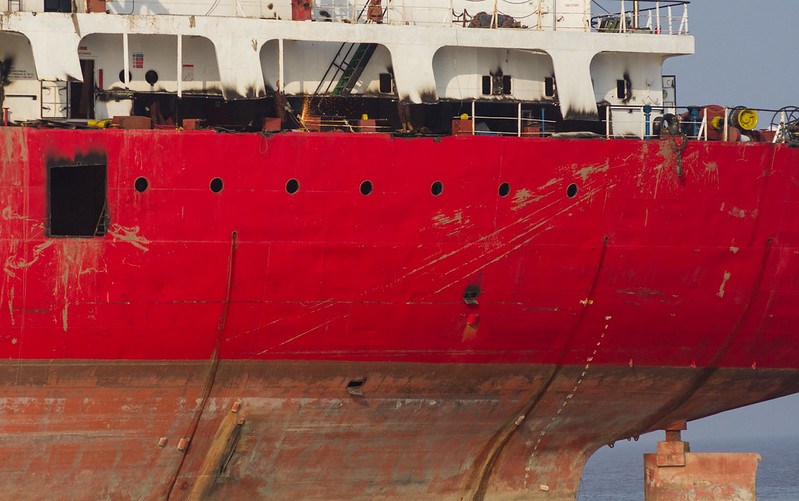 The Alang port in Gujarat is the largest ship-breaking yard in the world, followed by Chittagong Ship Breaking Yard in Bangladesh and Gadani in Pakistan. Alang recycles approximately half of all ships which can no longer be used. However, this thriving industry comes at huge environmental and social costs.

Ship-breaking is the process of dismantling obsolete ships for the purpose of scrapping or disposal. Each part of a junk ship can be dismantled and recycled, which is the process that takes place at Alang. The ship-recycling industry is a labour-intensive sector. It is also susceptible to environmental concerns especially when proper legislation is not followed.

According to 2019 data with United Nations Conference on Trade and Development (UNCTAD), 25.6% of all discarded vessels were dismantled in India, while this figure for Bangladesh is as high as 47.2% and for Pakistan it is 21.5%. Turkey and China dismantled 2.3% and 2% discarded ships in 2019.

Clearly, Bangladesh is becoming the most favourable destination for ship-breaking as India and China are reducing the number of imports of vessels due to rising environmental concerns. However, 2020 turned the tide for Alang and it has again started receiving many more ships, including the Indian naval vessel INS Viraat. Recent reports indicate that Alang is now preparing to double its ship-breaking capacity.

Ship-breaking is a source of livelihood for more than 1,00,000 people at Bhavangar (Gujarat), a prominent city closest to Alang. The junk market at Alang is so vast that it is the only leading producer of steel in Western India. Each and every iota of the ship is either reused or recycled at Alang and is adequately segregated and sold.

Dismantling of ships is vital to the economy of many countries. The reuse of salvaged materials from ships additionally diminishes the requirement for activities such as mining. The whole process of junk management at Alang follows a suitable protocol and is very systematic in nature. Ship-recycling claims to minimize waste by switching towards the reuse of few materials boundlessly. However, all of this comes at a huge price.

Large number of reports and documentaries available on the Internet are highlighting the dismal plight of workers involved in the ship-breaking industry. There are several hazards associated with the ship-breaking which impact human health, make workers vulnerable to even losing their lives in case the ship breaks and environmental damage.

Ship-breaking is also a major occupational and environmental health hazard. It is amongst the most dangerous of occupations, with unacceptably high levels of fatalities, injuries and work-related diseases.

The sector suffers from a serious lack of transparency, and no official statistics have been made available on accidents which occur at Alang. Due to high level of contamination caused by toxic elements such as mercury, cadmium and asbestos, workers are reported to suffer from respiratory, heart and neurological disorders.

Implementation and Efficacy of Existing Laws

Ship-breaking is a process in which skilled labourers should be given priority. Only those persons should be recruited who are actually fit and trained for the job. Educating the labourers about the recycling process and the toxicity of the chemicals would be beneficial, but is not often done. Every person has the right to be be aware of the chemicals they are being exposed to.

In addition, adequate food and medical facilities should be provided to the workers. Their health should be treated as significant factor to complete the various tasks related to recycling. Regular monitoring and assessment of pollutants in the ship-breaking yard should be carried out so that the health hazards can be predicted and prevented.

Personal protective kits including masks, helmets should be provided to the workers so that health hazards such as respiratory disorders can be avoided and they can get healthy work environment. Basic facilities for better employment conditions should be made available to all. The workers should also be made aware of the ship-breaking rules and regulations and the amendments that the government makes from time to time. If the companies themselves don’t do this, NGOs must take up this responsibility.

Emphasis must be laid on green ship recycling processes, facilitating minimal environmental and human exposure to hazardous materials. Streamlining the clearance permit process before the dismantling process by establishing a central authority overseeing the entire process will help.

This will especially be crucial in minimizing corruption and contractual evasions by making the process more transparent. Stricter monitoring mechanisms through international collaboration and strengthening local and national pollution control boards will help increase the efficacy of existing laws.

The total weight of INS Viraat is 27,800 tonnes and it is currently parked at the Alang ship-breaking yard. This naval ship is the second aircraft carrier slated to be broken down in India after INS Vikrant, which was dismantled in Mumbai in 2014.

INS Viraat aircraft carrier last sailed from Mumbai to Kochi in July 2016 and it returned to Mumbai in October 2016. In February 2021, the Hon’ble Supreme Court of India ordered status quo on dismantling of the decommissioned aircraft carrier INS Viraat. Prior to this, the Government of India had allowed for its dismantling.

The Hon’ble Supreme Court’s order has come after a private firm petitioned before it and offered to buy the decommissioned carrier. The private firm wishes to convert INS Viraat into a museum. The iconic ship has already been bought by Shree Ram Ship Breakers in an auction last year for ₹38.54 crores for its scrap value. Earlier, the decision to scrap INS Viraat was taken after due consultation with the Indian Navy, but now the decision has been kept on hold by the Supreme Court.

INS Viraat served the British Navy as HMS Hermes from November 1959 to April 1984. It was then refurbished and inducted into the Indian Navy in 1987 and was decommissioned in 2017. It has served the Indian Navy for 30 long and glorious years.

Views: 3,734
Share this ArticleLike this article? Email it to a friend!
Email sent!