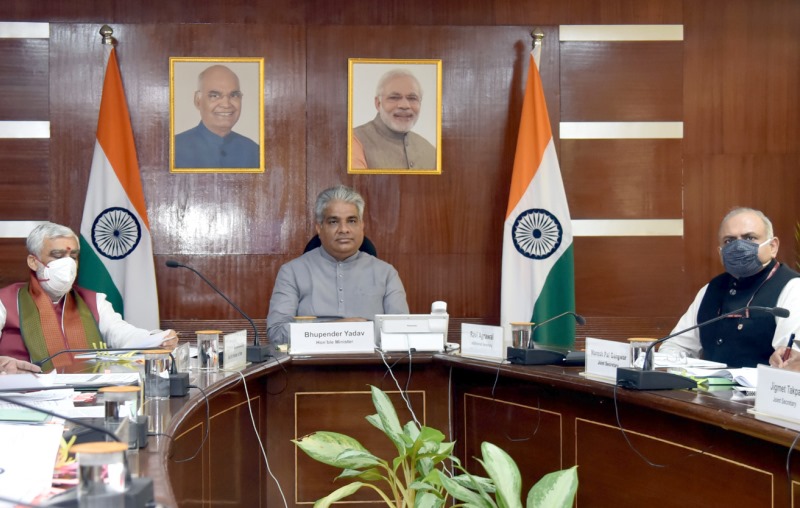 Stating that renewable energy and energy efficiency are among the key pillars of Indian climate change strategies, Shri Yadav mentioned that under the dynamic leadership of Prime Minister, Shri Narendra Modi, India has worked to make sure that renewable energy, particularly solar, becomes cheaper than energy from fossil fuels. The Minister further mentioned that India has already installed about 151 GW non-fossil fuel infrastructure and has declared an aspirational target of installing 450 GW of renewable energy by 2030.

The Environment Minister also mentioned about India’s Hydrogen Energy Mission, International Solar Alliance (ISA), Coalition of Disaster Resilient Infrastructure (CDRI) and leadership group for Industry Transition (LeadIT). Dr. Sultan Al Jaber, UAE Climate Envoy and Minister of Industry and Advanced Technology sought support of India for the UAE Initiative on Agriculture Innovation Mission for Climate (AIM-C) along with US and UK to be launched at COP26 to be held in Glasgow later this year.

The Union Minister of Power and New & Renewable Energy R.K. Singh echoed similar sentiments in his keynote address during the “(A) Multilateral Approach to Building a Global Hydrogen Economy” Webinar organised by the Ministry of New and Renewable Energy (MNRE), Government of India. The Minister informed that India is one of the few countries which has kept to its Paris Climate Change (COP21) commitments along with an exponential increase in renewable energy capacity. Considering the pace of development in the energy sector, the Minister assured that India is determined to not only achieve but exceed its commitments.

India is clearly on a path to becoming a world leader in Energy Transition, aiming to increase the share of non-fossil fuels to 40% of the total electricity generation capacity by 2030. In a meeting to discuss the Action Plan for enhancing the investment by power sector in renewable energy projects, Minister R.K Singh joined representative of power companies. A number of measures were announced in that meeting to facilitate government/ public sector unit companies to invest in renewable energy projects and make the transition to a green economy.

These announcement comes in the backdrop of the world witnessing the impacts of global climate change first hand. In India too, freak weather events have increased and the already vulnerable populations have become even more vulnerable due to climate change. Three new heatwave hotspots have been identified in India, putting large population at immediate health risk.

North-Western, Central, and further to south-central region of India are the three new hotspots of intense heatwave events over the past half-century, as per a government supported study which found an increase in deadly Indian heat waves in recent years. The study also highlights the need for developing effective heat action plans in the three heatwave hotspot regions with a focus on different vulnerabilities among the inhabitants.

With an ever-increasing extreme-temperature threshold, a heat resilient future is the need of the hour. Dense population with an intensive outdoor work culture calls for an equitable heat resilient mitigation and adaptation strategies covering each section of the society depending on their vulnerability. This is the need of the hour, and the government’s focus on shifting to renewable energy and ensuring energy efficiency are surely the first step, with much more that needs to be done to protect all sections of the society from climate change.

Views: 1,015
Share this ArticleLike this article? Email it to a friend!
Email sent!