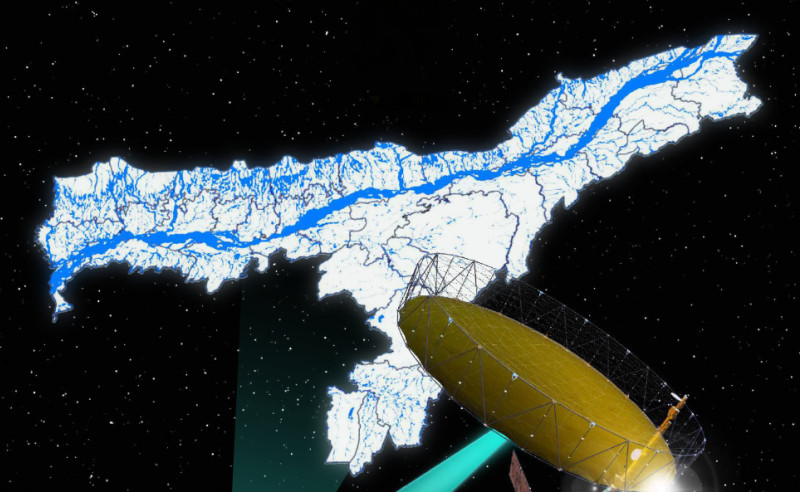 Assam is one of the most flood-prone states in India where floods have become an annual calamity. The extent of devastation due to floods is increasing significantly in Assam, and so is the tale of death and destruction. Incessant rain over the past weeks have wreaked havoc in Assam submerging much of of the state. The death toll due to floods has risen to 126 and places like Silchar in Cachar district of the state have remained submerged several days in a row. Millions of people are affected due to this.

According to the National Commission on Floods, it is known that 40% of the state’s geographical area is prone to floods. The flood-prone area of the state is 31.05 lakh hectares, against a total area of 78.523 lakh hectares. Assam accounts for nearly 10% of the total flood-prone area of the country. The floods of 1988, 1998 and 2004 were the worst for the state, the 2004 floods alone affected 12.4 million people and claimed 251 lives. Assam suffers an average annual loss of approximately 200 crores due to floods. In 1998, the loss suffered was approx. ₹500 crore and in 2004 it was approx. ₹771.00 crore.

What causes annual flooding in Assam?

The natural topography and annual excessive rainfall in Assam causes large scale devastation each year. One can say that the location of Assam is such that it is at the receiving end of large volume of water from monsoon rainfall, and certain parts of the state are low-lying which only adds to the misery. Apart from this there are several anthropogenic causes behind the destructive floods. The flood problem of the state is further provoked due to flash floods by the rivers flowing down from neighbouring states like Arunachal Pradesh and Meghalaya, which may not all be natural.

Bank erosion along River Brahmaputra, River Barak and its tributaries is another major reason why Assam gets flooded every year. It has been an issue since the last six decades; more than 4.27 lakh hectares of land has already eroded away from River Brahmaputra and its tributaries since 1950. This is 7.40% of the total geographical area of the state. Surveys carried out during different periods reflect an alarming picture regarding widening of River Brahmaputra. The width of the river has increased to up to 15 km at some places. Embankment breaches due to bank erosion is becoming increasingly common in Assam.

Construction of embankments to control floods had first started in Assam in the 1960s. The government spent good amount of funds on building these embankments but this practice seems to have failed miserably in Assam. Recently, three embankments were breached in Nagaon district. The government is constantly providing flood related updates and is requesting people to stay indoors. Almost the entire state is under unprecedented deluge. The situation is becoming grimmer since water in five rivers – Brahmaputra, Kopili, Beki, Pagladiya, and Puthimari is flowing above the danger level at several places.

River Kopili is above the highest flood level in Kampur located in the Nagaon district. Barpeta is the worst-hit district with over 12 lakh people being affected due to floods in the area followed by Darrang with over 4,00,000 people hit by the deluge and Nagaon with over 4,40,000 people affected. Food and potable water is not easily available to the flood affected persons. A population of nearly three lakh has been facing an acute shortage of food, clean drinking water and medicines almost entire towns have submerged in flood waters. Road and rail services remain disrupted in several parts of the state.

The floods are reported to have damaged 218 roads and 30 bridges.The destruction is not limited to humans alone, around 3.4 million animals remain affected in inundated areas, while 5,232 have been washed away by floods. According to an official statement, at least five animals, including a leopard, have already been killed in floods in Assam’s Kaziranga National Park so far this year. Some people stuck in Assam are expressing their helplessness due to floods via social media too. Rescue operations by the government are underway since over 26 lakh people are displaced and the death toll will rise rapidly if support is not immediately extended to the affected areas.

The state government is doing what it can and has launched helpline numbers 0361-2237219, 9401044617 and 1079 (toll-free) for the affected people of Cachar district. Authorities have set up around 1,425 relief camps and distribution centres in over 25 districts. Nearly 2.7 lakh people have been evacuated and moved to relief camps. The National Disaster Rescue Force (NDRF) teams from neighbouring states have been deployed in Silchar. Aerial survey of Silchar town is being done so that further support can be sent especially for evacuation of the affected persons. Amid the crisis, locals have reported thefts or attempted theft in flood affected areas in Silchar, making the situation more worse.

The overall situation in the state remains very concerning especially since the water level may rise with further rainfall. The increasing flooding situation is also linked to climate change which is projected to cause more frequent and severe floods in Assam.To protect Assam from floods, existing embankments should be regularly monitored for breaches. And all existing water bodies must be revived and restored. This will make the drainage system more efficient and the wetlands will act as a buffer against floods. People of Assam should be alerted about rising water levels well in time and a flood alert system needs to be put in place. Planning is the key here and there’s an urgent need to improve preparedness in Assam.

2 thoughts on “Assam floods have become a tale of destruction”

Views: 4,258
Share this ArticleLike this article? Email it to a friend!
Email sent!