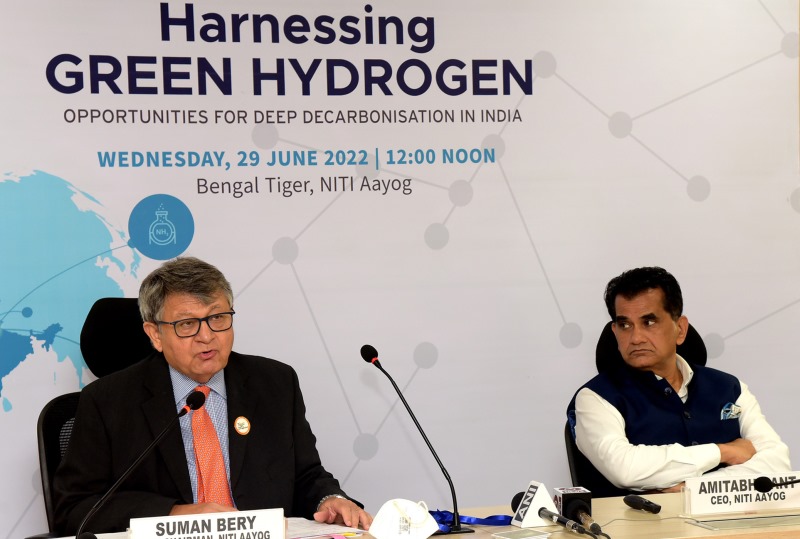 The CEO of NITI Aayog Amitabh Kant and Vice Chairman Suman Bery addressing at the launch of a report on Harnessing Green Hydrogen – Opportunities for Deep Decarbonisation in India in New Delhi on 29 June, 2022.

Green hydrogen, which is being seen to substantially spur industrial decarbonisation in the coming decades, seems to be the next green buzz. A Green Hydrogen Economy is being seen as critical for India to achieve its net-zero ambitions by 2070. Green hydrogen, produced through the electrolysis of water, is especially being seen as important for decarbonisation of harder-to-abate sectors such as fertilisers, refining, methanol, maritime shipping, iron & steel and transport.

A report releasede by the NITI Aayog promoting Green Hydrogen states that with emerging global momentum on hydrogen, India can situate this decarbonisation opportunity not just within the context of a low-carbon economy but also as an enabler of energy security and economic development for the nation. The NITI Aayog CEO, who was present during the report releasing ceremony remarked that given the right policies, India can emerge as the least cost producer and bring down the price of green hydrogen to US$ 1 per kg by 2030.

The report concludes that hydrogen demand in India could grow more than fourfold by 2050, representing almost 10% of global demand. Given that the majority of this demand could be met with green hydrogen in the long term, the cumulative value of the green hydrogen market in India could reach US $8 billion by 2030.

Views: 3,608
Share this ArticleLike this article? Email it to a friend!
Email sent!