A Must Read: City Improbable: Writings on Delhi 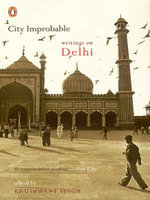 Following is an excerpt from City Improbable writing on Delhi, a Delhi anthology edited by Khushwant Singh. The book is a complete rendezvous with Delhi, its historical as well as recent past and its present and is aptly reviewed by the Telegraph as, “Anyone who has ever had anything to do with Delhi, or is interested in the history of cities, should take a look at this collection”.

Needless to say, it is a collector’s item that has tried to capture the mystical majesty of the city of cities in a wonderfully comprehensive manner!

But you don’t see that kind of thing as often as you used to. Delhi has become a very polluted and congested city. It has more cars than Bombay, Calcutta and Madras put together. So there is more poison on the air than in the other cities. That and the reckless use of pesticides has taken a heavy toll of insect, amphibian and bird life. In the rainy season, no frogs croak, no fireflies or moths are to be seen. Vultures have disappeared, sparrows have become scarce. The incidence of asthma and bronchial ailments has shown an alarming increase, and if residents of Delhi mange to survive it is because of the greenery around them.

The not-so-loveable aspect of Delhi is entirely manmade. Delhiwalas are about the most inconsiderate of the human species you can encounter. They think nothing of throwing their garbage into their neighbour’s homes or on the road. they observe no road rules and are ever eager to overtake others, blow their horns and get into violent arguments. On an average four to six people are killed every day by cars and buses. About the same number are murdered in cold blood. Thefts and burglaries  are a daily feature. Molesting women in buses is a common practice.