Save the Tiger, Save Humanity 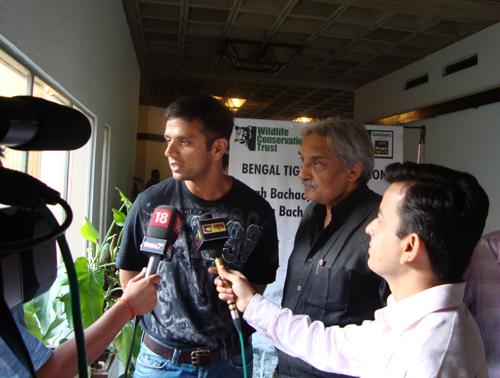 On the 28th of July 2009, a Tiger Rally was organised by the Delhi Greens (Editor’s Note: and by Sanctuary and a series of organisations) at the Nehru Memorial Museum & Library (NMML), Teen Murti House. WWF India, after correspondence with Mr. Govind Singh, was also present at the Event. It was very important for the Tiger Rally to happen when it did, since reports on the diminishing number of Tigers in India have been increasing in recent days. Numerous Tiger Reserves have declared immense scarcity of Tigers and some even had to admit that there were no Tigers left.

The event included activities for Schools in the NMML garden and a conference inside the building. The key speaker of the conference was Dr. Karan Singh, whose speech illustrated his genuine concern for the Environment and the endangered Tiger. However, it is the responsibility of the politicians to implement their visions to ensure sustainability and the protection of the Tiger’s natural habitat.

Outside the doors, numerous schools had combined forces to symbolically fight against the human destructive force. About 300 students joined hands to form the number 350, which was visible from the sky. The number 350 represents the upper limit and target of the Global Carbon footprint in parts per million. Only if the 350 mark is reached will our atmosphere be able to recover.

In addition, there was a poster drawing workshop and many children joined the rally dressed up as Tigers and other relevant themes to climate change and global warming. As a pleasant surprise Rahul Dravid was present at the conference, voicing his interest in the environment and the need to preserve the Tigers of India.

It was a successful event, even though there is still a long way to go. We need to understand that we humans rely on the natural world to survive. In order to ensure survival of our children and their children’s children we need to act now to save nature.

Views: 10,037
Share this ArticleLike this article? Email it to a friend!
Email sent!