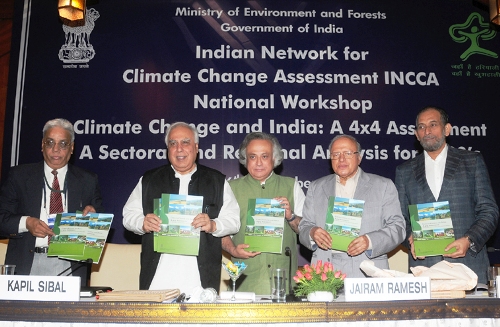 After becoming the first among developing countries to release updated greenhouse gas emissions report, India has taken another leap by releasing a “4X4” assessment of the impact of climate change on key sectors and regions across India in 2030s. The Report titled “Climate change and India: A 4X4 Assessment”, provides an assessment of impact of climate change in 2030s on four key sectors of the Indian economy in four climate sensitive regions of India. These are Agriculture, Water, Natural Ecosystems and Biodiversity & Health for the Himalayan region, the Western Ghats, the Coastal Area and the North-East Region. The Report has been prepared by the MoEF led Indian Network for Climate Change Assessment (INCCA).

While releasing the report, Environment Minister Jairam Ramesh shared his concern by stating, “There is no country in the world that is as vulnerable, on so many dimensions, to climate change as India is. This makes it imperative for us to have sound evidence-based assessments on the impact of climate change.” Also present at the occasion was Shri Kapil Sibal, Union Minister for Human Resource Development, Science and Technology and Earth Sciences who shared similar sentiments. “The impact of global warming in one part of the country is different from the other part of the country. We need micro study and micro assessment which will make difference in lives of people.”, he said.

The 4×4 Assessment examines the implications of climate change for India in 2030s deduced from a Regional Climate Model Had RM3 (Hadley Centre Regional Model Version 3) run for A1B scenario. It covers climate change projections, sea level rise and extreme events, agriculture, water forests and human health at macro level. Mr. Ramesh also informed the uniqueness of the efforts of such a comprehensive, long term assessment. “It is also for the first time that an assessment has been made for the 2030s where as all previous assessments were for the 2070s and beyond.” he informed.The finding of the report will surely be critical in sustaining India’s development for all sections of the society in all regions of the country.

Dr. M S Swaminathan , Member of Parliament, Rajya Sabha, who also presided at the release function advised to train two ‘Climate Managers’ at lowest institutional level like panchayat whose suggestions will help in sustainable agriculture. The data they provide will have to be involved in this Assessment work by agricultural scientists as the rise in rise of surface, change in rain patterns, temperature etc are affecting agriculture produces. The Ministry proposes to bring out a third report of this network in November 2011 which will look at the impact assessment on India’s carbon aerosol (black carbon) programme. The Fourth Report will come out in May 2012 and it will be an Assessment at the level of 16 Agro – climatic Zones.

Salient Findings of the 4X4 Assessment

Views: 8,220
Share this ArticleLike this article? Email it to a friend!
Email sent!