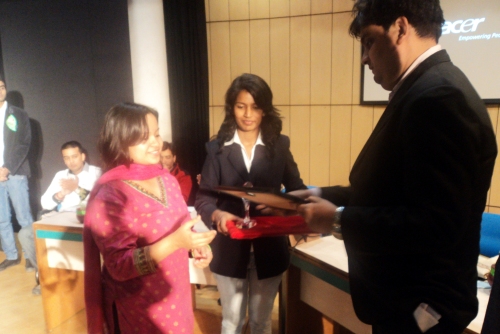 The Delhi Greens Blog was recently awarded for its good work in putting New & Social Media behind the green cause and using it to disseminate information and generate environmental awareness. Aastha Kukreti, one of our lead writers was conferred the ‘Green Warrior’ Award by the ISB&M School of Communication in their Media Mind Prints 2010 initiative. The initiative had an underlying objective of creating awareness amongst the youth of today and tomorrow regarding ‘Media and Environment’. Two other young green activists were given the ‘Young Communicator Award’ in the same function.

The Media Mind Prints 2010 initiative was taken across 25 cities and saw participation of over 25,000 youth from across the country. Organised with the theme of “Go Green Go Eco”, the event highlighted the role of media in bringing change by reaching out to all sections of the society. Chief among the various media tools, especially when it comes to engaging the urban youth, is digital media and the Internet. The Delhi Greens Blog is one such project which was launched in 2007 under the Green Media Network programme of the Delhi Greens organisation.

Ever since its launch as an online green outreach platform for generating environmental awareness and ‘creating’ more responsible citizens, this Blog—one of the first of its kind attempt—has engaged and involved large number of citizens in environmental events and activities while inspiring several others to initiate green actions. With the threat of climate change looming large, and a consequent urbanizing trend that is here to stay, sustaining our urban centers (of which Delhi is one) is becoming more and more challenging.

Addressing urban environmental challenges is therefore the need of the hour and will go a long way in tackling the climate crisis. This can only be done by ensuring greater citizens’ participation in governance as well as policy implementation which in turn requires our cities to have better informed and more aware citizens. That is the motivation of the Blog, with which the Green Media Network team at Delhi Greens continues to take forward the movement in order to bring green change. Delhi Greens thanks the ISB&M School of Communication and acknowledges their initiative in the right direction.

Views: 8,564
Share this ArticleLike this article? Email it to a friend!
Email sent!