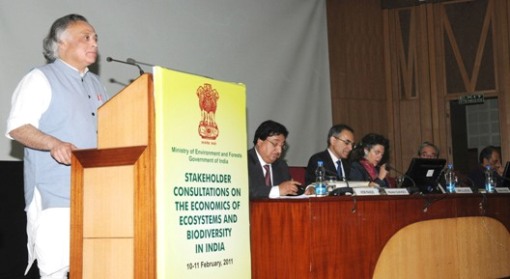 A two days stakeholder consultation to develop the framework for strengthening biodiversity conservation programs and initiating action for assessing the economic value of India’s natural capital is ongoing right now. It aims to recognize, demonstrate, capture and optimize the value of biodiversity and ecosystem service and targets policy actions at national and state levels, improvements in business assessments and disclosure, and improved citizen awareness of the issues involved. The consultations is expected to cover subjects like financing biodiversity in India, introduction of The Economic of Ecosystem and Biodiversity (TEEB) framework and its relevance for business and NGOs, bring forth climate change concerns with respect to biodiversity conservation and application of economic valuation tools.

“Biological diversity” means the variability among living organisms from all sources including, inter alia, terrestrial, marine and other aquatic ecosystems and the ecological complexes of which they are part; this includes diversity within species, between species and of ecosystems. “Biological resources” includes genetic resources, organisms or parts thereof, populations, or any other biotic component of ecosystems with actual or potential use or value for humanity. With an area of about 329 mha, India, the 7th largest country in the world is a recognized mega-diverse region. With only 2.4% of world’s land area, India accounts for 7 to 8% of the recorded plant and animal species. India has ten bio-geographic zones, namely, Trans Himalaya, Himalaya, Indian Desert, Semi-Arid, Western Ghats, Deccan Peninsula, Gangetic Plains, Coasts, North-East and Islands. The country also encompasses four global biodiversity hotspots.

According to sources at the MoEF, the total forest and tree cover of the country is estimated at 23.39% of the geographic area, of which forest cover accounts for 21.02% (69.09 mha). The forests in India have been classified into 16 major types and 251 subtypes on the basis of climatic and edaphic features. Thus, India ranks among the top ten species rich nations and shows high degree of endemism. Stakeholders consultations on the economics of ecosystems and biodiversity in India aims to recognize, demonstrate, capture and optimize the value of biodiversity and ecosystem service and targets policy actions at national and state levels, improvements in business assessments and disclosure, and improved citizen awareness of the issues involved.

Speaking at the Stakeholder Conference,  Environment Minister Jairam Ramesh said that India is well placed to lead the way in incorporating the value of nature into national, regional and local policy making. Mr. Ramesh also informed at the two day event themed on ‘Stakeholder Consultations on the Economics of Ecosystems and Biodiversity in India’ (I-TEEB) that India will soon launch a scheme in three states: Tamil Nadu, Gujarat and Maharashtra to introduce a market based system for controlling air pollution. “We introduce legal changes. We created regulatory authority also. The protection, preservation and regeneration of living beings will be central in biodiversity maintenance. Good quality of forest cover will help primary stakeholder, i.e. people.” the Minister said. The Minister also informed that one of the objectives of the Green India Mission is also to contribute towards maintaining quantity of forests.

TEEB Study leader and UNEP Special Adviser and Head of UNEP’s Green Economy Initiative, Shri Pavan Sukhdev said at the Consultation, “The loss of biodiversity and the ecosystem services impacts us all, but in India the rural poor are the first to be adversely affected by these losses. Defining the economic value of nature’s contribution to the human well-being of both rural and urban communities, and the costs to these communities if we allow the continued degradation of this natural capital is essential if India is going to be able to sustain the human-wellbeing of its population moving forward.” Consequently, a framework is planned to be developed for strengthening biodiversity conservation programmes and initiating action for assessing the economic value of India’s natural capital.

According to the Consultation organizers, such a study will enable to take in to account the valuation and economics of biodiversity and to ensure enhanced transparency, effectiveness and sustainability in utilization of natural resources, consistent with the needs of the country to achieve accelerated economic development. The study will also facilitate to meet the objective to adopt an open, transparent and competitive mechanism for allocation, pricing and utilization of biological resources. However, and in the light of practical environmentalism, what remains to be seen as to how effectively can we put a price tag on nature’s bounty, most of which is not only very precious, but also priceless.

Views: 7,366
Share this ArticleLike this article? Email it to a friend!
Email sent!