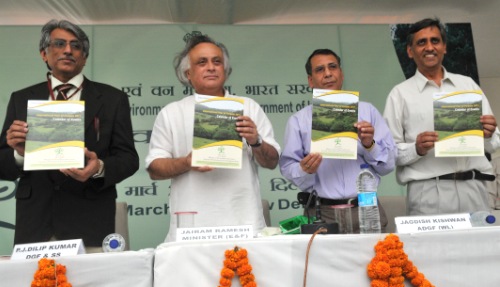 In keeping with the mandate of his Ministry of environment protection and conservation, Environment Minister Shri Jairam Ramesh clarified further his agenda by declaring that “We must finish de-greening before we start greening projects. The de-greening has been created by industrial construction.” Utilizing the opportunity of the World Forestry Day to the fullest, he further said, “The pressure of our population and works done in the name of progress have damaged our forests and rivers. This is the biggest challenge we face today. We have to achieve economic growth along with conserving forests and keeping our rivers clean.”

Reminding everyone about India’s rich culture and heritage of environmental consciousness, the Minister recalled the celebration of Van Mahotsav and said, “Our Culture and traditions teach us to preserve our forests and natural resources. We celebrate World Forestry Day since 1971, but in our country Van Mahotsav (has been) celebrated much before that in the month of July since 1950 all over the country which was started by the then Home Minister Late Kulpati K M Munshi.” The Minister also emphasized the role of people, women, NGOs and students in the protection and upkeep of our forests. “The government will succeed in this movement only with cooperation from people. Awareness about protecting environment is tremendous today and schools, colleges, and NGOs must work together to conserve our environment.”, he added.

Shri Jairam Ramesh also highlighted the role women are playing in different parts of the country especially with respect to protecting the forests. “Women are leading the movement of ‘Save the Forests’ and with (their) partnership we will be able to achieve our goal.” the Minister stated firmly. A calendar of events for International Year of Forests, 2011 was released at the World Forestry Day function. Prizes were also distributed to the winners of a painting competitions organized earlier. Students from about 30 schools had participated in this competition.

Dr. P. J. Dileep Kumar, Director General, Forests and Special Secretary who was also present at the function said that forests and natural resources are important to maintain our environment. He highlighted the importance of cities as repository of biodiversity and wildlife by stating that our life depends on greenery around us. Cities are indeed unexplored avenues of unique biodiversity and evolution patterns that have largely remained unexplored by ecologists and environmentalists.  He appealed to students and people to develop a habit of bird watching and preserve water as measures to generate awareness and protect our environment.

Views: 4,945
Share this ArticleLike this article? Email it to a friend!
Email sent!