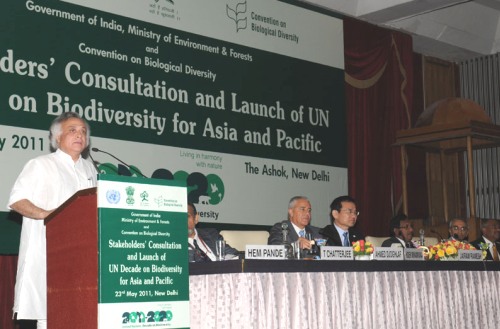 Minister of State for Environment and Forests (I/C), Shri Jairam Ramesh at the Launch of the United Nations Decade on Biodiversity for Asia and Pacific

The period 2011-2020 has been declared by the United Nations General Assembly as the UN Decade on Biodiversity (UNDB). This has been done largely to raise awareness about the importance of biodiversity and highlight the threats that it faces. The Decade coincides with the duration of the Strategic Plan for Biodiversity 2011-2020 adopted by CoP-10 to the Convention on Biological Diversity (CBD) held in Nagoya, Japan in October, 2010. It contains 20 targets to help achieve the three objectives of the CBD and the Millennium Development Goals (MDGs).

The Ministry of Environment and Forests (MoEF) and the CBD organized a day long Stakeholders’ Consultations and Launch of the UNDB for Asia and Pacific in New Delhi yesterday. The event was presided over by Environment Minister Jairam Ramesh. Dr. Ahmed Djoghlaf, Executive Secretary of the CBD Secretariat based in Montreal also attended the event. The Vice-Minister of Environment, Japan representing the CoP-10 presidency and Ministers of Environment from other countries also participated. Other participants included representatives of Central and State Government Ministries, National Biodiversity Authority, State Biodiversity Boards, Universities, specialized agencies, UN bodies, International and Civil Society Organizations.

India is hosting the eleventh Conference of the Parties (CoP-11) to the Convention on Biological Diversity and the sixth Conference of the Parties serving as Meeting of the Parties (CoP/MoP-6) to the Cartagena Protocol on Bio-safety which will be held from 1 to 19 October, 2012. CoP-11 will be the first CoP in the UNDB that India takes pride in hosting. The year 2012 is also significant because it is the year of the 40th anniversary of Stockholm Conference, the Rio Earth Summit (Rio +20) and the 10th anniversary of the Johannesburg Summit. This indeed provides India with an opportunity to consolidate, scale up and showcase our initiatives and strengths on biodiversity protection and promotion.

During the formal launch of the UNDB for Asia and Pacific on May 23rd yesterday, Jairam Ramesh unveiled the logo and slogan for CoP-11, which has been developed by the National Institute of Design, Ahmedabad. A video developed by the CBD Secretariat for the UNDB including a message from the UN Secretary General Ban ki Moon were also screened at the event. A Kuchipudi dance performance on Prakruti Rakshati Rakshita (Nature Protects if She is Protected) and a video entitled ‘Incredible India and Incredible Biodiversity’ proved to everybody India’s intentions, capabilities and willingness to spearhead the UNDB into a greener, more diverse future for all!

With inputs from Niharika Sharma.

Views: 7,062
Share this ArticleLike this article? Email it to a friend!
Email sent!