Lecture on Environment, Democracy, Authority: The Meaning of Anna Hazare in Ralegan Siddhi 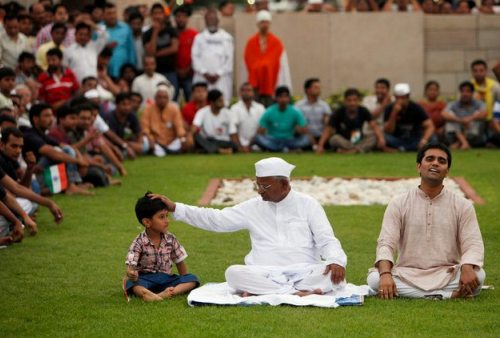 Not so long ago, in a village named Ralegan Siddhi, poverty and indebtedness made people helpless often leading them to desperation and ultimately to alcoholism. Quarrels and street fights were daily chores and the village itself was in a pathetic state of mere existence. This was the distressed Ralegan Siddhi which made one man stand out and ‘be the change.’ Anna Hazare took upon himself to rid Ralegan Siddhi of its miseries and transform it into a prosperous village which feeds into the development of India. Through watershed management and improvement in the overall environment, he could bring about a change in the social structure of the village and became a leader that everyone came to respect. Thirty six years from then, this same Gandhian moved the nation from Rajghat and Ramlila Maidan in Delhi.

The Nehru Memorial Museum & Library (NMML) is organising a lecture on ‘Environment, Democracy, Authority: The Meaning of Anna Hazare in Ralegan Siddhi’ by independent scholar Mr. Mukul Sharma. ‘Green’, ‘ideal’ villages are important markers of the environmental movements in India. Anna Hazare and his environmental and social programs in Ralegan Siddhi village, Maharashtra merit attention not only for its environmental impacts, but also because of its comprehensive and multifaceted nature.

The lecture will focus mainly on understanding how rural developmental and environmental work in the journeys of Anna Hazare and Ralegan Siddhi acquire their legitimacy and authority. In what ways are they fed by, and feed into, some of the dominant political cultures of the state. To what extent are they articulated within a coherent ideological framework? Built on such a framework, does its political theory and practice open up or expand political conservatism. The speaker Mr. Mukul Sharma is an independent scholar and author of Landscapes and Lives.  His new work now in press is titled Saffron and Green, Hindu Nationalism and Indian Environmental Politics.

One thought on “Lecture on Environment, Democracy, Authority: The Meaning of Anna Hazare in Ralegan Siddhi”

Views: 10,828
Share this ArticleLike this article? Email it to a friend!
Email sent!