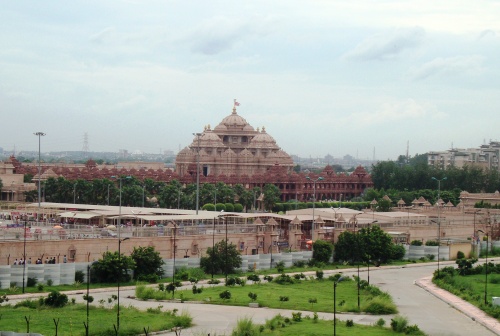 Akshardham Temple in Delhi stands in the proximity of River Yamuna. The Commonwealth Games Village alongside it is also constructed on the Yamuna floodplain.

It took an earthquake measuring 4.2 on the Richter Scale for Delhi to wake up to the reality that the city is located in Seismic Zone IV and lies among high-risk areas in terms of earthquake frequency and intensity. It was not really the intensity that “shook” the city as much as it was the proximity to the quake. The Wednesday earthquake event–that occurred in the late hours of September 7 2011–was epicentered at Sonipat in Haryana, a few kilometers North of Delhi.  The tremors were felt across north India, including in Kashmir and in Uttarakhand. Many people in Delhi came out of their houses into open areas and a large number of  children were reminded of the earthquake drills they undertook in school. The people seemed relatively better prepared but can we say the same for the infrastructure and planning of Delhi city?

According to the Delhi Disaster Management Authority (DDMA), the city’s settlement pattern has never been viewed in relation to location and geological characteristics. Pockets with high rise buildings or ill-designed high-risk areas exist without specific consideration of earthquake resistance. Similarly, unplanned settlements with sub-standard structures make them prone to heavy damage even in moderate shaking during an earthquake event. Further, the DDMA alerts that business centers like Connaught Place, etc. with sprouting high rise office complexes and high rise housing schemes are high risk areas in Delhi due to vertical configurations. The walled city area, the trans-Yamuna area and scattered pockets of unplanned settlements also figures as high risk zones due to their sub-standard structures and high densities. The Chamoli earthquake of 29 March 1999, which was felt all over Delhi, had left cracks in a tall buildings located on alluvial deposits in the trans-Yamuna area.

A Times of India report after the tsunami in Japan highlighted the studies that are predicting an earthquake measuring 7 on the Richter striking Delhi within a 50-year window of 1983-2033. The report then hammered on the irony that while the city should be preparing itself more for disaster mitigation and preparedness, the two of the most high-risk buildings in Delhi are the Delhi Secretariat, the high-seat of power and the office of Delhi Police Commissioner, both built on the Yamuna River floodplain. As if this wasn’t all, Delhi recently witnessed the construction of even more large structures on the flooplain such as the Akshardham Temple. The Commonwealth Games 2010 was perhaps the final nail in the coffin with the Games Village being constructed on the floodplain adjacent to the Akshardham Temple and widespread irregularities in the construction of all Games related infrastructure including flyovers.

A Hindustan Times report on corruption in the organising of Commonwealth Games 2010 indicates that the Central Vigilance Commission (CVC) found after inspection that concrete core samples taken from the already laid concrete failed to meet the requirement of strength. The elevated Barapulla Nullah Road are some of the CWG related projects that are presently under the scanner. The crumbling infrastructure by mere rains prior to the CWG 2010 was enough to understand how it has added to the vulnerability of the citizens of Delhi to an earthquake disaster. The need of the hour is the same that it has been since infrastructure development began in Delhi. The first step towards earthquake disaster mitigation, as also agreed by the DDMA, is that the problem must be recognized and quantified. Such is the situation today, that in merely doing this, several buildings and structures in Delhi may not meet Indian standards on seismic constructions and may be considered deficient from seismic safety view point.

What needs to be understood is that an earthquake in itself normally does not kill. And that is is only sub-standard buildings and structures inhabited by people which transforms a natural event to a natural (man-made?) disaster. We therefore need to be prepared in understanding earthquake resistance technology after understanding seismic micro zonation of different localities. Even in that, a lesson we learned from the Fukushima disaster, any level of preparation may fail against the fury of Nature. Yet, construction of mega structures in Delhi has taken place in the past on an ad hoc basis based more on the then need than future considerations of safety.

Recent discussion with a construction contractor based in west Delhi suggest that changes in building bye-law regulations now necessarily check for some degree of earthquake resistance. This is definitely a healthy sign of change even as the contractor suggested it is merely more paper work. The challenge also remains to be prepared and retrofit the existing earthquake prone structures which are aplenty in Delhi’s landscape. How we respond to this challenge will be a direct measure of the safety and earthquake resilience of India’s National Capital. For now, we share with you some resource material for awareness generation on earthquake disaster management prepared by the National Disaster Management Authority (NDMA). Click here to download and do circulate it among your friends, colleagues and loved ones.

Views: 19,474
Share this ArticleLike this article? Email it to a friend!
Email sent!