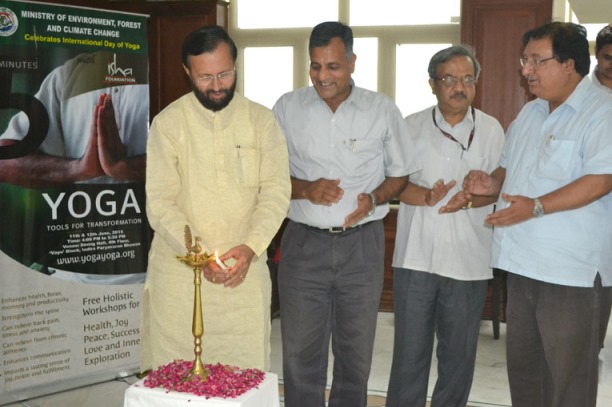 Environment Minister Shri Prakash Javadekar, among others, lighting the lamp at a training session on Yoga ahead of the Celebration of International Yoga Day being held on 21st June.

Weekly environmental news roundup from across different media networks for week 24 (between June 8 to June 14) 2015.

Delhi Jal Board has started generation of bio-gas power at its sewage treatment plant in Kondli, making it the third STP to have such facility.

The National Green Tribunal has directed the Confederation of All India Traders to submit a “comprehensive and definite plan” as to how traffic in the crowded Chandni Chowk market can be permitted to carry on without interfering with commercial activity.

5. Health crisis looms as Delhi reels under 15,000 tonnes of waste

The strike by sanitation workers has turned East Delhi into a huge garbage dump over the past 10 days, posing a serious threat to people’s health, but the squabbling men in authority can’t smell the stink.

Amid the looming ‘garbage crisis’ in the capital, the National Green Tribunal today sought the Delhi government’s response on dumping of municipal waste on the streets.

In an effort to address water woes of Delhi residents and to crack down on the water tanker “mafia” functioning here, the Delhi Jal Board on Monday launched an online portal for public monitoring of water tankers.

The National Green Tribunal has directed over 70 budget hotels situated near the Indira Gandhi International Airport, which were earlier sealed by the Delhi Government, to move applications before the Delhi Pollution Control Committee accompanied by documents to resume operations while complying with the norms.

President Pranab Mukherjee on Monday inaugurated a state of the art Sewage Treatment Plant in the President’s Estate in New Delhi.

With an aim to re-establish the role of green spaces as connective links between urban spaces, the Delhi Urban Art Commission has proposed creation of an environment-friendly pedestrian and cycling network through the city forests of South Delhi.

In the past one year, about 100 top-of-the-line eateries, restaurants and commercial establishments – including KFC and Cafe Coffee Day – have been found flouting environmental laws.

The Delhi Development Authority, which reports to the Union urban development ministry, has decided against regularising dozens of colonies that have mushroomed over decades on the Yamuna’s floodplain.

As Delhi emerges as the most polluted city in the world, the Environment Ministry is contemplating emergency measures to combat the rising air pollution levels in the Capital.

14. Why doesn’t the quality of air grab Delhi’s citizens?

The past few years have seen social movements, individual citizens and social media platforms come together in Delhi to pressure the government for change.

After nearly seven years of debate, the Mangar Bani forest area of Faridabad has finally got the protection it rightly deserves.

It is likely to be an important day for the lifeless Yamuna, as the National Green Tribunal is likely to take a decision on how its “ecological flow” can be restored.

17. CPCB to bring about new norms for sewage treatment plants as government takes steps to clean up rivers

Taking a dip in the Ganga may soon become a pristine experience, if steps being planned by the government to clean up India’s rivers fructify.

18. Govt may replace expert panel on Ganga with technocrats

The environment ministry is set to replace a panel of experts with a body of technocrats to decide the fate of hydropower projects on the Ganga, signalling the government’s inclination to move forward with the ventures despite resistance from within and caveats from the Supreme Court.

19. 4,400 hectares of Ganga land freed from encroachment in UP, Centre planting saplings

About 4,400 hectares of land along the Ganga has been freed from encroachment in Uttar Pradesh and the Centre has started planting saplings on it as part of a special afforestation drive.

In a major setback to real estate developers in the city, the National Green Tribunal has banned sale and purchase of flats built close to the Yamuna.

21. NGT seeks plan on keeping sewage out of Yamuna

The National Green Tribunal on Tuesday asked the MCG and HUDA to submit by Wednesday a detailed action plan to check the discharge of untreated waste water into the Najafgarh drain that connects to Yamuna.

22. Banks of river Ganga in Uttarakhand likely to have herbal units

Union Ministry of Water Resources, River Development and Ganga Rejuvenation and the Ministry of AYUSH are discussing a proposal to build herbal units on the banks of river Ganga in Uttarakhand as part of the NDA government’s ambitious Clean Ganga project.

A new study has suggested that increased carbon dioxide levels in air, due to global warming, restrict plants’ ability to absorb nutrients.

As several nations brace for implementing plans to cut greenhouse gas emissions, such efforts to rein in global temperatures may lead to more people going hungry, a new study suggests.

Views: 2,368
Share this ArticleLike this article? Email it to a friend!
Email sent!