Next Vacation, Take the Tiger Express to India’s Hinterland 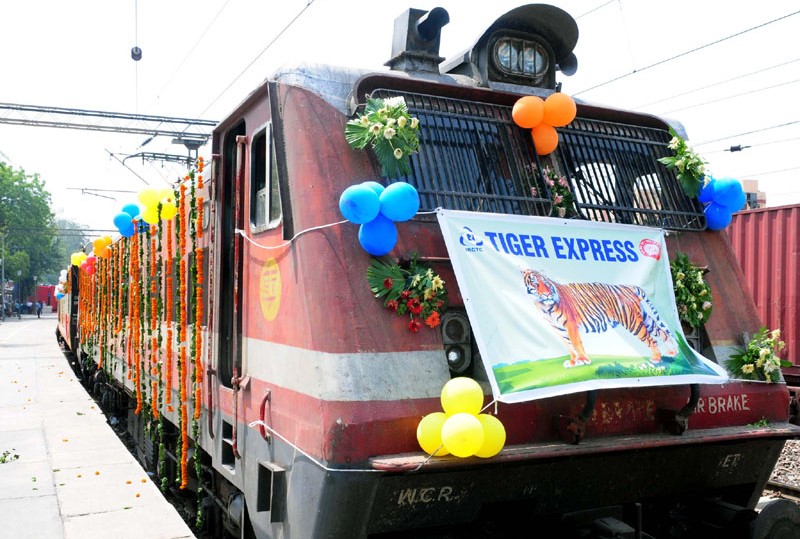 The inaugural run of the Tiger Trail Circuit Train from Delhi Safdarjung Station, being flagged off by the Union Minister for Railways, Shri Suresh Prabhakar Prabhu, through video conferencing on the occasion of the World Environment Day, 2016.

The Ministry of Railways has launched a Tiger Express train which has been conceptualized through the personal interest of the Railway Minister himself! The Tiger Express tourist train will be operated by the Indian Railway Catering and Tourism Corporation (IRCTC).

The Tiger Express itinerary for a total of 5 days/6 nights starts from Delhi followed by Katani, Jabalpur, Bandhavgadh and Kanha. The semi-luxury train will take its guests to the world famous Bandhavgarh and Kanha National Parks in Madhya Pradesh. In addition, the trip will also include a visit to Dhuadhar Waterfall in Bedhaghat near Jabalpur.

The itinerary has a tariff structure starting from Rs 38,500 to Rs 49,500 for single occupancy. An additional surcharge of Rs. 4,000 per person will be charged from foreigners for the Safari booking at Bandhagarh and Kanha.

The most important objective of the train is to create and spread awareness about the wildlife in general and the tiger in particular.

Speaking on the launch ceremony of the Tiger Express, Railway Minister Shri Suresh Prabhu said that Indian Railways is fully committed to address environmental issues. He pointed out that since assuming charge, he has taken a number of initiative to create a separate, dedicated Environment Directorate in the Ministry of Railways.

Referring to the Tiger Express, he said that the tiger is at the apex of the food chain and so has tremendous ecological impact. It is therefore befitting to launch a train focused on this subject. He also shared that more such tourist circuit trains, e.g. elephant circuit, desert circuit etc. are also being planned.

Views: 3,489
Share this ArticleLike this article? Email it to a friend!
Email sent!