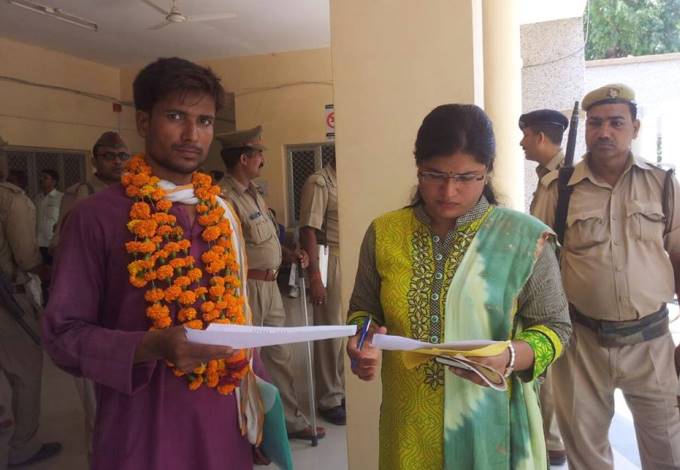 The Dharti Bachao Cycle Yatra reached Bareilly on 11th June. Prior to this, Mr. Gyan Prakash had reached Barabanki District on 8th June 2016.

After night stay at Etauja in Lucknow, Mr. Gyan Prakash reached Sitapur at 10 o’ clock on 9 June. He met the DM here and was also given an opportunity to hold a press conference. Mr. Gyan Prakash left Sitapur at 4 o’ clock and reached Maigalganj in Kheri District. Mr. Gyan Prakash spent the night here in a Siddhheshwari Devi Mandir complex and he started his journey towards Shahjahanpur the next morning. 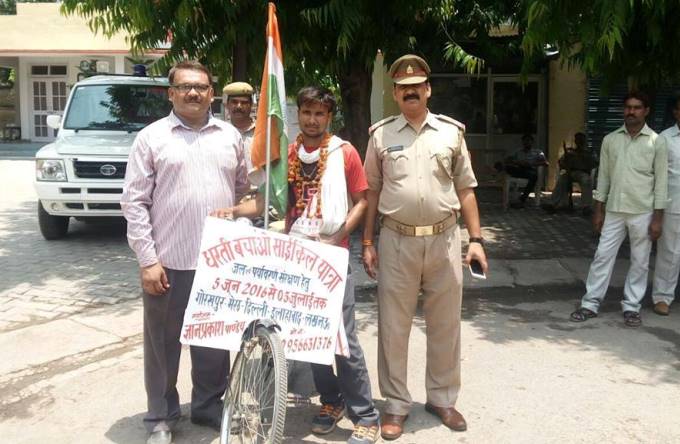 On 10th June at 10′ o clock in the morning, Mr. Gyan Prakash reached Vinoba Sewa Ashram in Bartara on Sitapur Road, Shahjahapur. The main city of Shahjahanpur was established by Diler Khan and Bahadur Khan sons of Dariya Khan, a soldier in the army of Mughal Emperor Jahangir. The oldest Tehsil in the District is Tehsil Tilhar, which was developed by a Rajput Tirlok Chandra and is also known as Teer Kamaan Nagar due to its ability to supply bows.

At Shahjahanpur, Mr Gyan Prakash met Mr. Ramesh Bhai winner of Jamana Lal Bajaj Award 2011 in the field of social work. After that, Mr. Gyan Prakash met the DM and also the local media persons. Mr. Gyan Prakash stayed at Katra during the night of 10 June and started his Dharti Bachao Cycle Yatra early next morning for Bareilly.

Bareilly has been immortalized by the legendary Bollywood song, “Jhumka Gira Re…” Also known as Nath Nagari, (Land of Lord Shiva) and historically as Sanjashya (where the Buddha descended from Tushita to Earth), Bareilly is now a centre for furniture manufacturing and trades in cotton, cereal and sugar.

With this, the Dharti Bachao Cycle Yatra completed few more kilometers in its journey to meet district officials and make them aware about environmental issues while simultaneously urging them to carry out more and more tree plantations, ensuring water and energy conservation, urging them to shift to renewable energy, ensuring sanitation in the entire district, promoting organic farming with farmers and strengthening PRI’s for better implements of schemes.

Views: 3,017
Share this ArticleLike this article? Email it to a friend!
Email sent!