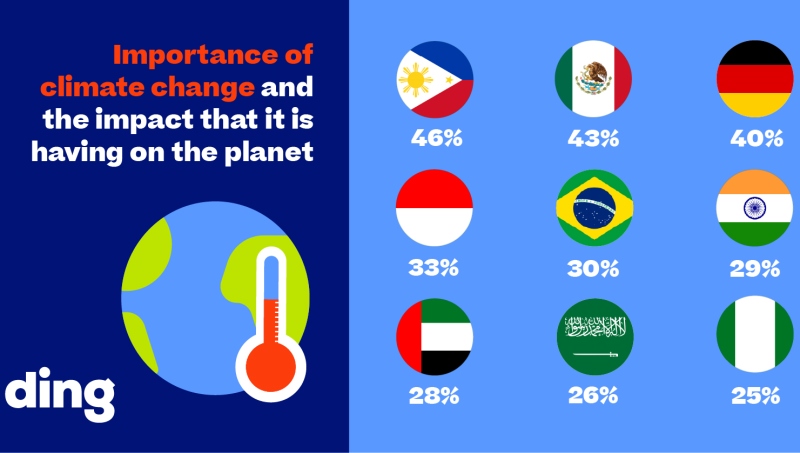 A recent global survey organised by UK based Ding company analyzed the attitudes and views of consumers operating in the prepaid economy. The findings revealed that climate change is the primary concern, ahead of economy, recession, global politics and cyber crime. This was true for respondents in eight of the nine countries surveyed, with only Nigeria citing economic prosperity as a more important global issue than climate change. Interestingly, the survey found that nearly one-third of India considers climate change to be an important issue in the present day.

The Ding Global Prepaid Index (GPI) is a major bi-annual survey analysing the prepaid market. The GPI shines a light on the growing appetite among people across the socioeconomic divide for consumer goods or services in the Prepaid economy. The survey gathered insights from 6,250 respondents from across Europe, Asia, and the Americas regarding their use of prepaid offerings, examining their attitudes, activities and outlook for the future. Nigeria, Africa’s largest producer of oil, was an outlier in this survey. The other countries included India, Mexico, Germany, KSA, UAE, Brazil, Indonesia and the Philippines.

Commenting on the findings Mark Roden, Founder and Chief Executive of Ding.com noted, “The results of these findings represent hope for future generations and show a clear majority of people from across the world now view climate change as the single most important issue facing humanity.” He added, “while global politics, cybercrime, recession are still major concerns for those surveyed, climate won out. Consensus like this does offer more evidence that we are at a defining moment now for action as it is what people all around the world clearly want.”

The bi-annual global study into consumer confidence commissioned by Ding, one of the world’s largest mobile top-up service, examined the views of respondents from regions traditionally associated with high prepaid mobile use. The report explores global prepaid confidence trends in mobile consumption, behaviours and usage.

While 26% of Nigerian respondents ranked the economy as their number one global priority vs. 24% who believe climate change is the most pressing global issue, nearly half of all Mexican and Filipino respondents, 42% and 46% respectively, were found to view climate change as their primary global concern.

The results paint a picture of consensus and collective awareness of the devastating impact a changing climate will have on the planet. Respondents from 8 out of the 9 nations involved in the survey ranked climate change as the most important issue facing humanity, sending a decisive message to world leaders for global action as talks enter their final week at the UNFCCC hosted COP26.

Only 13% of all respondents on average view the use of cyber-attacks on political elections as their number one global priority, compared to 18% of people who view next generation technologies making work forces redundant as the most important issue facing us all. Clearly, the writing is on the wall, and the verdict of prepaid mobile users around the world now almost unanimous, there is a need for climate change, and climate action must be delivered NOW.

Views: 1,595
Share this ArticleLike this article? Email it to a friend!
Email sent!