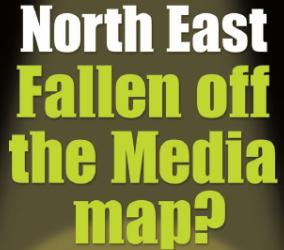 Or, why does the media give so little space to this vast region?

The Foundation for Media Professionals (FMP), in association with the Nehru Memorial Museum & Library (NMML), invites interested individuals to a panel discussion on whether the mainstream media is neglecting the North East at the nation’s peril.

The panelists have been specially chosen to bring out the diversity of the North East:

The issue at focus would revolve around questions such as does the media contribute to the isolation of the states lumped together as the North East, and to their exclusion from the mainstream discourse? Would reporters in Delhi or Bombay be able to even name  the capitals of all these states if asked? How much news space do all the NE states together average in newspapers across the country, compared to the coverage given to Kashmir?

4 thoughts on “Media Dialogue Invite on North East: Fallen off the Media Map?”

Views: 4,507
Share this ArticleLike this article? Email it to a friend!
Email sent!