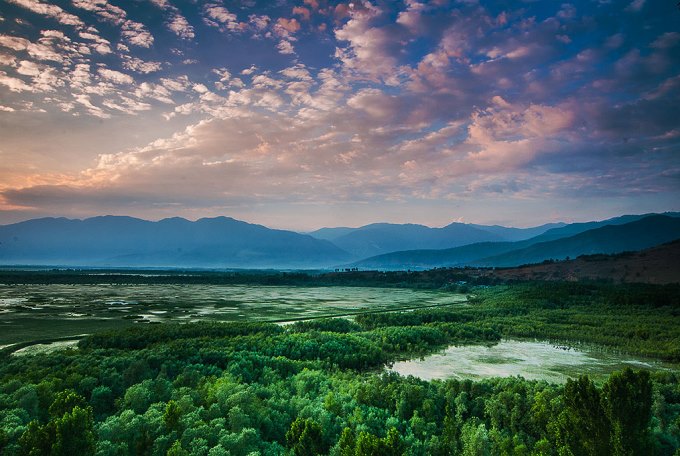 A trip to a Wetland is always a rewarding one. Here is the list of top ten wetlands of India, from north to the south, which are a must visit for any travel enthusiast!

Located in Kashmir valley, the Wular lake is the largest freshwater lake in all of Asia. It is an important habitat for fish and has lusciously edible fish species pleasing the taste buds of the Kashmiris. Some of the more frequently found fish species here include Cyprinus carpio, Barbus conchonius, Gambusia affinis, Nemacheilus sp., etc.

The lake is also an ensconce to many terrestrial bird species like Short-toed Eagle (Circaetus gallicus), Monal Pheasant (Lophophorus impejanus) and Himalayan Pied Woodpecker (Dendrocopos himalayensis albescens). Nothing could be more enamouring then the sight of millions of birds together in this Heaven on Earth!

Harike lake shares its area with the Tarn Taran, Ferozpur and Kapurthala districts of Punjab. Acting as a waterfowl refuge, the lake supports more than 400 avian species. In addition to being haven for birds, Harike also harbours endangered aquatic mammalian as well as reptilian fauna like Indus river dolphin, smooth-coated otter and seven species of rare freshwater turtles.

Harike is a significant abode for the birds migrating from across the international frontiers too. So next time you get an itch to travel, grab your cameras, enter this inviting ecosystem in the right season, look for the most appropriate viewpoint and you get a perfect capture for your next Instagram post, or bird photographs archive.

Situated in Rajasthan, this area is actually a mix of desert soil and salt giving it a beautiful white luster. Some of this wetland is covered with water and is a variant with the season. The lake is very shallow and is actually a saline wetland. Its scenic beauty is amazing on a full moon night when you feel like walking on this never-ending land of silver.

You can also enjoy paragliding and camping around this wetland. Due to the picturesque town of Jaipur nearby, and beautiful sunset and sunrise, several movies like Gulaal, PK, Delhi 6, Highway, etc. have been shot here. This huge wetland is a wintering ground for thousands of pink flamingos which are its most attractive feature. In addition, you can find foxes, deer and nilgai roaming freely.

Bishnupur in Manipur boasts of having the only floating National Park in the World, the Loktak Lake. This iconic lake of Loktak is famous for its circular floating swamps (called phumdis in the local language), floating on the lake covering a substantial part of the lake area. The lake has reported over 100 species of birds and over 425 species of animals including the the Indian Python, sambhar and barking deer.

The Loktak Lake is the last natural home of the dancing deer, Sangai or Rucervus eldii eldii. In addition, Loktak is a birders paradise. The most commonly sighted birds in the region include black kite, East Himalayan Pied Kingfisher, Lesser Skylark, Lesser Eastern Jungle Crow and more. The blend of rich biodiversity with delightful landscape makes it a must go place.

Home to more than 700 species of all kinds of flora and fauna, the Bhoj Lake of Bhopal is an important site of avian fauna with more than 150 species of both migratory and resident birds. The sparkling lake in the crimson evening haze will make your heart skip a beat! The tranquil ambience during the dusk make this place a Zion!

A recent phenomenon is congregation of more than 100 – 120 Sarus cranes (Grus antigone), the largest bird of India known for its size, majestic flight, and life time pairing, in the lake. A Boat Club on its eastern side, offers various exciting water sports such as kayaking, canoeing, rafting, water skiing, parasailing etc.

Clouds upon clouds of more than 200 types of birds, land here after travelling about 3,500 km from their nesting ground in Central Europe to spend the winter at Nalsarovar in Gujarat! Here they find food and warmth and thus visit Nalsarovar every year from November to February, which is a time of birdwatcher’s delight making it one of the largest bird sanctuaries in India.

In addition to the avian diversity, a few mammalian species including the endangered wild ass and the black buck are also found here. Migratory bird populations include Rosy Pelicans, Flamingos, White Storks, Brahminy Ducks and Herons. Thousands of migratory waterfowl flock to this sanctuary just after the Indian monsoon season sets in. Memories with shepherds populating the islands of the lake and folk dancers and artisans on the bank are sure to enchant the visitors who choose this place as their travel destination.

Chilka Lake, Asia’s largest brackish water lagoon, is nestled in the heart of the coastal Odisha (Orissa). It offers visitors a spectacular display of its colourful avian charms in a thousand different hues presented by over 160 bird species. The best time to visit is between November and February. The lake and its reed islands teem with nesting birds like White Bellied Sea Eagles, Ospreys, Golden Plovers, Sand Pipers, Flamingos, Pelicans, etc.

Chilka Lake is the largest wintering ground in the Indian sub-continent for migratory birds, flying great distances in October from as far away as Siberia, Iran, Iraq, Afghanistan and the Himalayas and generally staying until March. The Lake is also home to a diverse range of aquatic life, including 225 species of fish and the Irrawaddy dolphin (Orcaella Brevirostris). The rare limbless lizard, Barkudia insularis is endemic to one of the lake’s small islands. These characteristics makes this place a lovable site to visit.

Kolleru Lake, in northeastern Andhra Pradesh state, lies between the Godavari and Krishna river deltas near the city of Eluru. Carp and prawns are fished commercially in the lake, and prawns are processed at the village of Akid. Many birds species are known to migrate here in winter between October and March. Reports suggest birds like Siberian Crane, Ibis, Painted Storks, Grey or Spot-billed Pelican (Pelecanus philippensis) have been sighted here.

Kolleru Lake is the paradise of serenity and is heart of all snappers. If you are craving for some me-and-me time away from the hustle bustle of the city, this place has perfect composure to offer. Because this lake is less known and rarely visited, you can have your own hours of solitude here without any hassles.

Created for the conservation of Black Bucks in 1967, the Point Calimere Lake in Nagipattinam District of Tamil Nadu is marked by tall sand dunes and tropical evergreen forests. It is also fringed by saline swamps and thorny scrub around backwaters.

Vembanad lake is at the heart of Kerala backwaters with hundreds of kettuvallams (house boats) floating and numerous resorts on its banks. It is the longest Lake in India and is an ideal habitat for shrimps. The fragile ecosystem carries more than 100 birds as native and there are about 150 aquatic species in the Lake including mullets, catfish, pearl fish, prawns, Catla, Rohu (Labeo rohita) etc.

The lime shell fishery here is one of the biggest of its kind in the whole country. One should not miss seeing the beautiful alluring scenery this Lake has to offer. Businesses around the Lake were held responsible by some for the Kerala floods. A recent study suggests that Lake biodiversity has now returned to normalcy after the Kerala floods. One must visit this place as a responsible and Eco-conscious tourist.

Top image of Wular Lake by Eye.Ess.Ohh via Flickr

Views: 3,763
Share this ArticleLike this article? Email it to a friend!
Email sent!