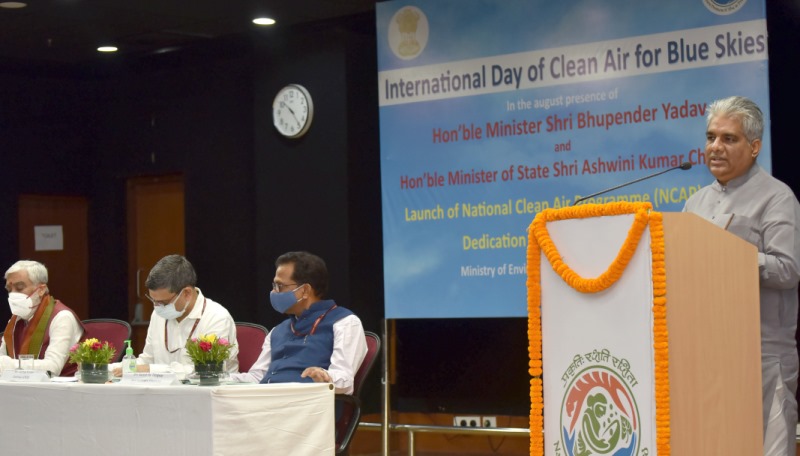 Environment Minister Bhupender Yadav virtually addressing at the inauguration of the first functional smog tower in India at Anand Vihar on on 7 September, 2021.

Environment Minister Bhupender Yadav virtually inaugurated the first functional smog tower in India at Anand Vihar, Delhi. The Minister expressed hope that the pilot smog tower project will yield fruitful results and supplement the air quality improvement efforts. He also urged all stakeholders to sincerely and earnestly contribute to achieve cleaner air and healthier lives for all. The Minister said that the Government under the leadership of the Prime Minister is now actively linking all policy approaches to give paramount importance to conserve public goods like water, air and the Earth.

The smog tower certainly seems like an essential equipment for Delhi, which was the most polluted capital city in the world in 2020. Delhi earned this title for a third consecutive year, according to a report by a Swiss group which was released in March this year. The report ranked cities based on their air quality measured in terms of the levels of ultrafine particulate matter (PM 2.5) that can enter the organs and cause lasting damage.

The smog tower at Anand Vihar, with a height of over 20-metres, has been set up to improve air quality in a radius of around one kilometer. It is of downdraft type smog tower, i.e., polluted air comes in from the top of the tower and clean air comes out of the bottom which is intended for localised reduction in air pollution, especially particulate matter. The filtration system used in the tower has been designed by University of Minnesota with an expected efficiency of 90%.

40 fan units have been installed to provide a design airflow rate of 1000 m3/sec. Both the towers have been built by Tata Projects Limited (TPL), with technical assistance from IIT Bombay and in collaboration with IIT Delhi. The smog towers are being installed on the lines of China, which has experimented with this technology in its capital Beijing and other cities. The Delhi cabinet gave approval for the project in October 2020.

Environment minister Gopal Rai had said last week that the 20-metre-long structure, which has been set up to improve air quality in a radius of around one kilometre, will function at full capacity after the monsoon season. The tower, built at a cost of ₹20 crore tower, has been funded by the Government of NCT of Delhi. Earlier, officials had said that a two-year pilot study will be undertaken to ascertain the effectiveness of the smog tower after it becomes operational.

The smog tower works in such a way that it helps in reducing approx. 94% of airborne particulate matter. It transforms fine and ultrafine dust particles into coarse dust. This device is designed in the form of a tower in such a manner that like a vacuum, it sucks up the smog present in the atmosphere from the top and releases the filtered air through its vents. This anti-smog tower works with the goal that it helps to decrease approx. 94% of airborne particle issues. This contraceptive is arranged as a crest in such a way that, like a vacuum, it sucks the dark clouds present in the earth from above and then releases the isolated air through its holes.

Smog Tower can be useful in an area where there is too much smog and they can be provided in open public places such as gardens or where people gather for clean air. Low power consumption does not require any special enclosure for its power source. However, their use must not be seen as an alternative to trees which clean our air, filter the dust and give us many other ecosystem services without us needing to spend even a rupee on them.

Views: 1,356
Share this ArticleLike this article? Email it to a friend!
Email sent!