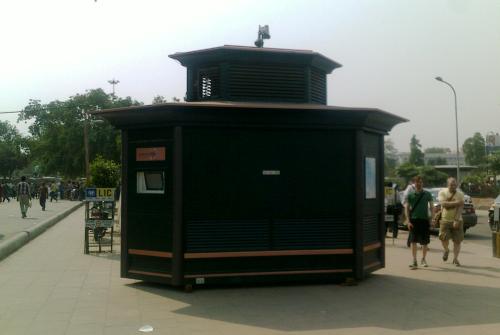 An outdoor air purifying system made by Italian company Systemlife and installed at Connaught Place by NDMC is symbolic of cluelessness that prevails in the higher echelons of the government. I returned home this morning, after an interview with a German researcher on Delhi government’s climate initiatives, to find a newspaper report which made a perfect specimen for the central argument I tried to put across in the meeting — the Delhi govt, just like its counterpart in the centre, has no clue what they are talking about, no clue about the scale of the climate crisis, what needs to be done and how ineffective will be their so-called plan.

The newspaper report I’m referring to touted “CP’s air cleaner than before” because of an outdoor air purifier installed there for the last month. You read that right, an outdoor air purifier. I cannot believe this scam has survived over one month. When I first saw news reports last month, I was aghast at the collective ignorance of the government and the media. Certain at the same time that I’d see a report in the next few days citing an expert clarifying that this had no chance of making any discernible impact on air quality of the region. Surely, I thought someone would point out that you don’t install air purifiers in open areas!

The emperor-has-no-clothes moment I was expecting has not only not arrived, but the emperor is on to another round of parade. The news today is covered by several newspapers. It apparently originated with this release from the PTI: “Air purifier station at Delhi a big success.” The source cited is not an air monitoring agency but the company that did the installation. The machine is claimed to have captured 2 kg of particulate matter but out of how much? All this claim proves is that the device does filter out the air it sucks but is it actually effective in reducing pollution of that region? What is the reduction in particulate matter (in ppm) measured by nearby monitors? If it impacts a limited localised region, how much precisely is that area?

Systemlife, the Italian company behind this technology publishes no specifications of their products on their website. The site contains no technical details and there is no mention of peer-reviewed scientific papers or independent studies that corroborate that its products meant for the outdoors improves air quality of a localised region. Interestingly, the company’s product page for Model Città, that was installed at CP, does not even make such a claim. All it says is that it cleans the air it sucks — without specifying the quantity or the effect on the localised area. News reports from last month do provide an indication of capacity — 10,000 cubic meter per hour.

10,000 m^3 capacity effectively means an area less than 23 meter long, 23 meter wide and 20 meter high (air we breathe)! That certainly wouldn’t cover much of CP. But this is assuming that air stands still over a given area, which of course it doesn’t. The rate of air flow over a 100m distance at just 1 m/s wind speed at the height of 20 m is 72 Lakh cubic meter per hour (7,200,000 m^3/hr), according to Dr. Sarath Guttikunda, a scientist associated with Desert Research Institute (Nevada, US) specialising in air pollution. This is taken from his post on Clean Air Portal — the only online reference I could find where this scam has been exposed. 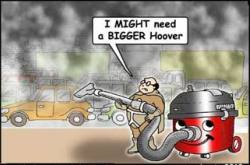 You don’t need to be a scientist or a mathematician to know that air mixes rapidly in open areas. The question is, is our government incapable of both simple math and common sense? What about newspaper editors? Proponents of the machine could argue that whatever little the machine is doing is still commendable. But that would be an argument made without any sense of scale. The scale in this case is like a 2.5 crore (which is what this machine cost) water purification system installed on the banks of Yamuna with a cleaning capacity of a home water purifier!

Sure, it may be cleaning 10 litres of polluted Yamuna water per hour, at the rate of 0.003 litre per second, but does it matter in a river with a flow of 8.5 million litres per second? That is the scale of con that is being perpetrated here. The health chief of NDMC while launching the machine said that money does not matter when it comes to health of Delhi citizens. Systemlife intends to install 100 such machines in Delhi. Ritika Modi, head of Uniglobe Travel South Asia, the Indian partner company of Systemlife, said every Indian city needs these machines.

At 250 crore for hundred machines that promise to be as effective as the proverbial drop in the ocean, I hope that better sense will prevail with the government. Thankfully, the current installation is only a pilot one and the government says it will monitor air quality for three months before taking a decision. If the process is honestly followed there is no chance of it getting through. The point is, the pilot was not needed had anyone done even the most rudimentary thinking. But I suspect the lure of a magical vacuum cleaner that sucks out all the city’s pollution was too much to resist for any thought process.

Editor’s Note: This post is authored by Manu Sharma and was first posted on the Orange Hues Blog.

5 thoughts on “All for Clean Air: The Suckers at Delhi Government”