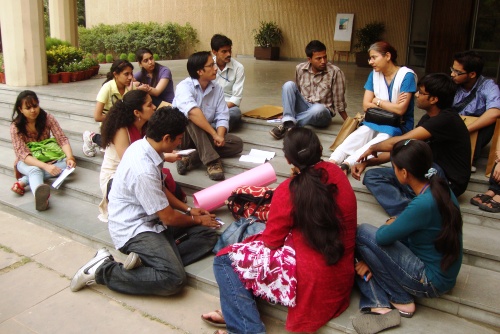 The urban biodiversity group at DYSoC 2010

The first day of “Delhi Youth Summit on Climate, 2010 (DYSoC)”, witnessed a new phase in the environmental movement among the youth in the city. The youth who attended the summit meant and were ready for action. Without doubt it’s the youth who will inherit the city and with doubt and uncertainty around, they are debating their future. Throughout the day the delegates comprising school/ college students and young professionals kept their energy levels high to drive home their concerns and derive solutions to many of the pressing environmental issues the city is facing.

The day started with a panel discussion with Dr. Chirashree Ghosh (DU), Gaurav Gupta, Jaimala Iyer and Madan Mohan. The Carbon Map of Delhi was the attraction of the day. Sharing her achievement with the youth, Dr. Chirashree Ghosh, Asst. Professor at the University of Delhi said, “The carbon map of Delhi is a project sponsored by the Delhi Government where we studied the sector wise emission of the most important greenhouse gas (GHG) from Delhi. We found that even though CNG has been introduced in the city, the transport sector is still the major contributor to global warming in Delhi. Our study also revealed that the domestic/ household sector in Delhi cannot be overlooked when it comes to developing policy for mitigating to climate change as it too contributes significantly according to the carbon map.”

Joining from the Government and encouraging the youth was Dr. B. C. Sabata, Sr. Scientific Officer at the Dept. of Environment, GNCT and head of the Eco-Clubs in Delhi. He invited the youth to join hands with the Government and take active participation in all governmental initiatives in the city that can bring change and those that need to be changed. Besides the serious climate science talks and discussions, the youth were also motivated through a playput together by the students of Ryan International School, Mayur Vihar.

The youth then had an exciting group discussion on important topics like Water, Waste, Energy, Transport, Urban Planning and Urban Biodiversity. The aim of the group discussion session was to allow the youth to interact with each other, share their views, analyze issues and come up with solutions. Delhi Greens thus brought together the youth from across the capital city and challenged them to understand the various urban environmental issues in the wake of climate change.